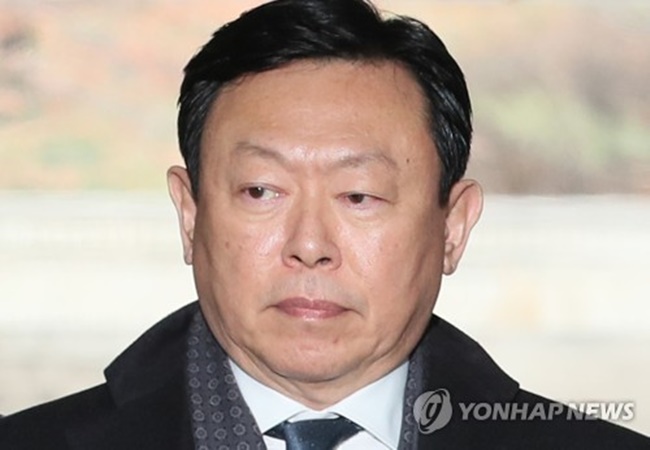 Lotte Group Chairman Shin Dong-bin is accused of giving 7 billion won (US$6.43 million) in bribes to a foundation run by ex-President Park Geun-hye’s friend Choi Soon-il as he sought favors in winning a government license to run a duty-free business in Seoul. (Image: Yonhap)

Lotte Group Chairman Shin Dong-bin is accused of giving 7 billion won (US$6.43 million) in bribes to a foundation run by ex-President Park Geun-hye’s friend Choi Soon-il as he sought favors in winning a government license to run a duty-free business in Seoul.

Earlier in the day, prosecutors demanded a four-year jail term for Shin for the alleged bribery. Shin’s lawyers have denied the accusation.

Separately, prosecutors asked a court to hand down a 25-year prison term to Choi, who was at the center of the massive corruption scandal that led to impeachment and arrest of Park.

The Seoul Central District Court will hand down its judgment on Shinon Jan. 26.

The court is also set to issue a separate sentence on Shin on Dec. 22 on charges of embezzlement and breach of trust.

“We will go through the remaining court procedures in a sincere manner,” a Lotte official said.

Industry watchers say a guilty verdict, if handed down by the court, could deal a heavy blow to the country’s fifth-largest conglomerate, which has been moving to enhance its managerial transparancy and streamline its ownership structure.

In October, Lotte established the holding company Lotte Corp. in a bid to solidify Shin’s leadership.

The legal battle is the latest headache to hit the retail giant.

Lotte Group is said to have incurred about 2 trillion won (US$1.78 billion) in damages in recent months amid a Seoul-Beijing diplomatic spat over Seoul’s deployment of a U.S. missile defense system.

Lotte became a key target of Beijing’s ire when it provided its golf course in March as the host site of the Terminal High Altitude Area Defense, seen as a security threat by China.

Beijing took punitive action against the conglomerate’s business inChina. Eighty-seven of its 112 Lotte Mart discount stores suspended operations, and sales at the handful of stores that managed to stay open dipped more than 80 percent. The conglomerate decided inSeptember to give up and announced it would sell off its local chain.

Founded in Japan in 1967, Lotte grew into one of South Korea’s major chaebol, driven by its success in the retail, food and amusement businesses. The group’s business includes chemicals, duty-free, finance and construction, and it has a global workforce of 125,000.