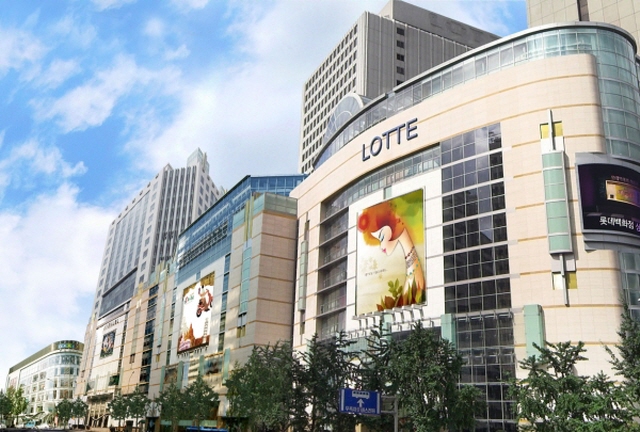 Lotte Corp. said that 12 trillion won has been earmarked for next year, particularly on enhancing the online business in the retail sector and expanding facilities for its chemical business in South Korea, Indonesia and the United States. (image: Lotte Shopping)

SEOUL, Oct. 23 (Korea Bizwire) — Lotte Group said Tuesday it will invest 50 trillion won (US$44 billion) and create 70,000 new jobs in the next five years in its first major business decision after its chief returned to the helm of South Korea’s fifth-largest conglomerate.

Lotte Corp., the business group’s holding firm, said that 12 trillion won has been earmarked for next year, particularly on enhancing the online business in the retail sector and expanding facilities for its chemical business in South Korea, Indonesia and the United States.

It will be the largest amount to be invested by the company in a single year, it said.

Lotte said it will focus on the digital transformation of its retail services using new technologies, such as big data and artificial intelligence, as well as developing new shopping malls.

Lotte said it will spend 10 percent and 25 percent of the planned investment, respectively, on its food and tourism businesses.

On the global front, Lotte will continue to expand its businesses in Indonesia and Vietnam, while pushing for entry into new markets, it said.

The announcement came less than three weeks after its Chairman Shin Dong-bin was released from jail following an appeals trial.

He had been in a detention center since February for involvement in a corruption scandal that led to the ouster of former President Park Geun-hye last year.

Earlier this month, the Seoul High Court sentenced Shin to 2 1/2 years in prison, suspended for four years, for giving 7 billion won in bribes to a nonprofit foundation controlled by Park’s friend.

Upon Shin’s release, Lotte vowed to contribute to the national economy and fulfill its social responsibilities.

Also Tuesday, Shin left for Japan and he is known to be planning to meet with the management of Lotte’s Japanese unit, as well as its shareholders and investors.

Shin resigned as the Co-CEO of Lotte Holdings in February following a lower court’s ruling, but has retained his status as a director of the board of the Tokyo-based firm, which effectively exercises control over the business group’s numerous subsidiaries in both South Korea and Japan.

The holding company was down 3.4 percent to 51,200 won, while the broader KOSPI index plunged 2.57 percent. The investment plan was released during trading hours.

In a separate announcement on the same day, Lotte Confectionery Co. said it has signed an agreement with a Myanmarese confectionery firm, L&M Mayson Co., to purchase 80 percent of its stakes for 76.9 billion won.