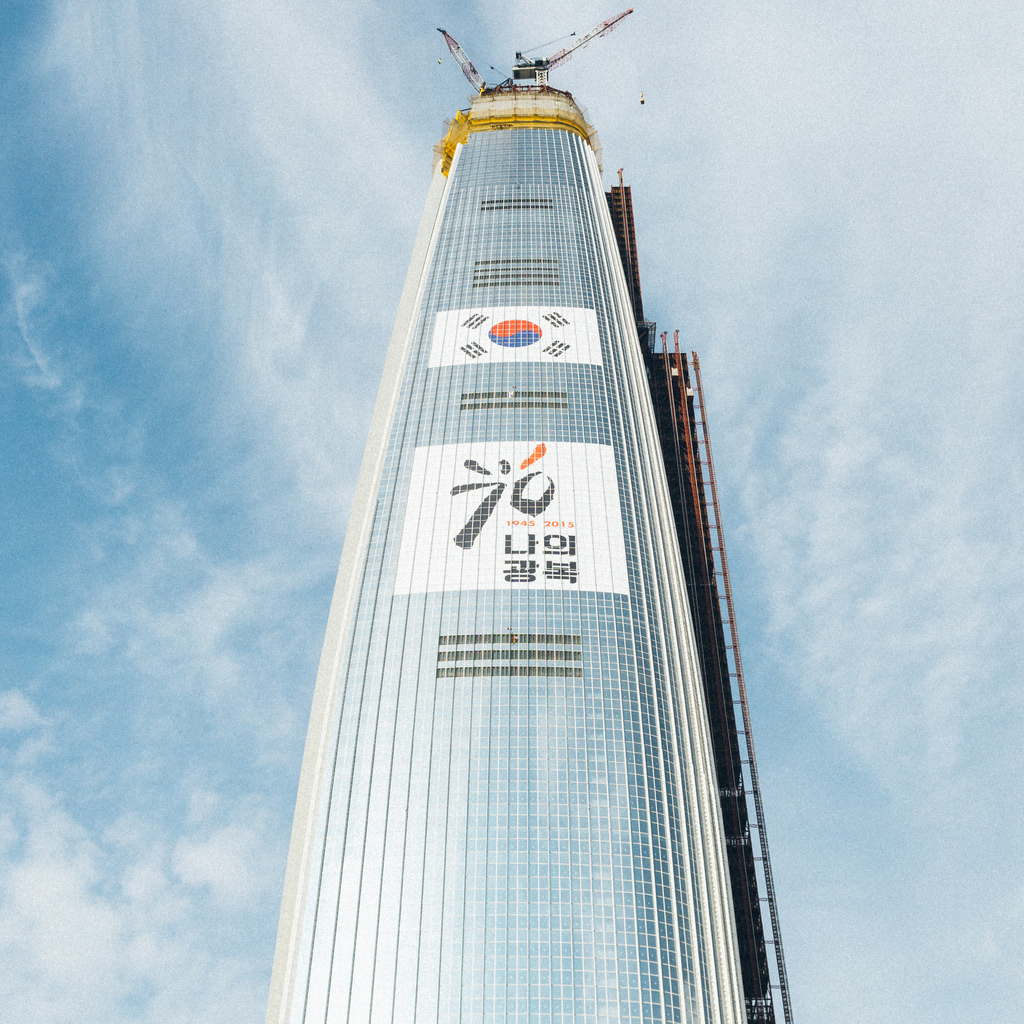 The gigantic flag, which is 36 meters wide and 24 meters high, was fixed to the building’s outer structure in August 2015 to commemorate the 70th anniversary of Korean independence on August 15. (image: Flickr/ Teddy Cross)

SEOUL, June 8 (Korea Bizwire) – Lotte Group officials have made the decision to remove a giant Korean national flag that is currently being displayed on the company’s new 123-storey World Tower, in July.

The gigantic flag, which is 36 meters wide and 24 meters high, was fixed to the building’s outer structure in August 2015 to commemorate the 70th anniversary of Korean independence on August 15. A 42-meter-wide anniversary slogan banner which read “My Independence” (in Korean) was hung below the flag.

Lotte Corporation, which operates the new tower, has since retained the flag, but changed the slogan banner to “Towards Unification and Tomorrow” (Oct 2015), “Takeoff! Korea” (Jan 2016), and “Hurrah Korea!” (March 2016).

In April, a civic organization filed a complaint with the Songpa District Office and the Seoul Metropolitan Government, questioning the banner and flag’s legality in accordance with the ‘outdoor advertisement act’ and building codes. The group demanded that the flag be removed, as its presence is allegedly in violation of the flag code, which prohibits the use of flags for profit and marketing purposes.

The city informed Lotte of the complaint on May 8, and Lotte replied on May 9 with an acknowledgement, while outlining plans to remove both the flag and the slogan within the month of May.

But when the removal plan was publicized, other civic groups and individuals filed complaints in turn requesting that the flag and slogan remain. Even the Ministry of Patriots and Veterans Affairs sent an official correspondence requesting that the flag and the slogan (which read “Hurrah Korea!” at the time) be retained for the upcoming Month of Korean Patriots and Veterans (June).

Ultimately, Lotte decided to keep the flag and banner until the end of June.

“Although we expect further complaints for the extended display, we decided to accept the request of the ministry and other organizations,” said a Lotte official. “We have been put in an awkward position with the rising complaints regarding the display of the national flag, which we started with pure intentions to promote patriotism.”