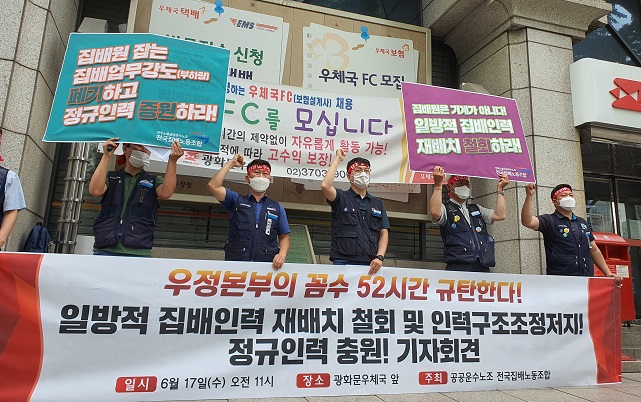 Members of the Korean Postal Worker’s Union hold a press conference in front of the Gwanghwamun Post Office in Seoul on June 17, 2020. (Yonhap)

The Korean Postal Worker’s Union held a press conference in front of the Gwanghwamun Post Office in Seoul on Wednesday.

During the press conference, the union claimed that since the coronavirus outbreak, mail carriers’ work load has become heavier as they were assigned extra work such as the delivery of registered mail to those in self-quarantine and the delivery of masks for public health centers.

The union openly criticized Korea Post, the state postal service, for breaking the promises it made to reduce the work burden for letter carriers.

The union said that Korea Post, South Korea’s state postal office, is rather increasing the letter carriers’ labor intensity by repositioning their work without adding new hires to the payroll.

Korea Post agreed last year to expand its pool of letter carriers, adopt a five-day work week, and reduce letter carriers’ work load. Despite such promises, however, the work conditions for mail carriers have yet to improve.

“We deliver mail without even stopping for lunch,” union head Choi Seung-mook said.

“We work wearing masks under the scorching sun. If Korea Post does not hire more employees, this unhealthy work environment will continue to worsen until someone eventually dies.”