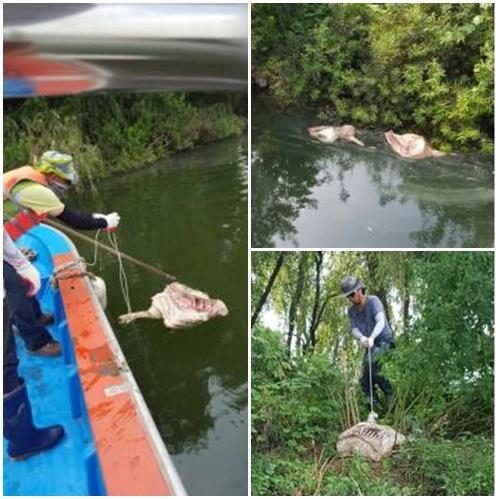 “We were only able to recover a third of what was disposed of, but with decomposition, the sight was just horrific.” (image: Seoul Metropolitan Government)

SEOUL, Sept. 30 (Korea Bizwire) – A 51-year-old man identified as Lee (full name undisclosed) was placed under arrest after disposing of some 13 tons of animal carcass in the Han River, a major waterway that flows through the heart of Seoul, according to the Supreme Prosecutors’ Office on Friday.

Lee had been a priest at an unnamed religious community.

After leaving the congregation, he opened a private yoga school to continue his spiritual training as well as expand his congregation, and the school has been used for religious activities such as worship and prayers.

During the investigation, Lee said he wanted his good intentions to pay out, and sought ways to reach out to the gods for divine safekeeping, which is when he found online information about ancient animal offering rituals.

Lee then started purchasing the animals, cut them into four or six pieces, and disposed of them near Hanam’s Misa Bridge, where the Namhan and Bukhan rivers (Han River tributaries) meet.  The location was perceived by Lee as a site of “great spiritual energy”.

A year into his holy profession (since October 2015), and after multiple reports of floating carcasses that followed, he was eventually caught on August 17.

“We were only able to recover a third of what was disposed of, but with decomposition, the sight was just horrific,” said an official. “Discarding such a massive number of animal carcasses threatens both the environment and the water resources of citizens, so we decided on an official arrest.”

Currently, dead animals are treated as “general waste”, meaning they must be disposed of in government-issued trash bags. Other disposal methods, including burying, burning, or dumping into a river are all in violation of the Waste Control Act, although offenders are usually subject to fines.

Lee and two of his accomplice will undergo further investigation, and are expected to go on trial next month.

“This was a matter that could endanger the health of residents in the metropolitan area, and we’ll continue to take strict legal actions against unlawful waste disposal.”