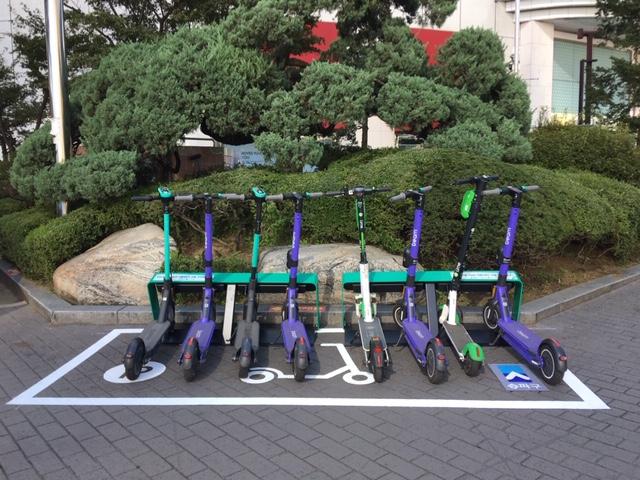 Electric scooters are parked at a designated zone for personal mobility devices in front of Jamsil Station in southern Seoul, in this photo provided by the Songpa District Ward Office on Oct. 7, 2020.

CHUNCHEON, Dec. 31 (Korea Bizwire) — A man has been fined for rejecting a breathalyzer test after allegedly riding an electric scooter under the influence of alcohol, a local court said Thursday.

The Chuncheon District Court, about 80 kilometers east of Seoul, said it has fined a 37-year-old man 5 million won (US$4,600) for violating the Road Traffic Act.

In July, the man who appeared to be drunk was discovered by police officers while riding an e-scooter in Hongcheon, a Gangwon Province city below Chuncheon.

The police officers requested the man take a breathalyzer test, but he refused. The man, alleged to be red in the face and staggering, cursed at the officers and argued that e-scooters were not cars.

The court said the defendant’s act is worse in nature than drunk driving as it could hamper police officers’ efforts to make roads safe.

“He committed an offense again despite his two previous criminal convictions for drunk driving,” it added.

But the court said it took into consideration that the defendant’s e-scooter is not a personal transportation device subject to criminal punishment under the revised Road Traffic Act, which took effect Dec. 10.

Before the revision, an electric scooter was classified as a mini-sized motorcycle, and those who ride them under the influence of alcohol could face up to a five-year prison term or 20 million-won fine.

But the revised law labeled e-scooters as bicycles, thereby making them subject to a fine of only up to 30,000 won.