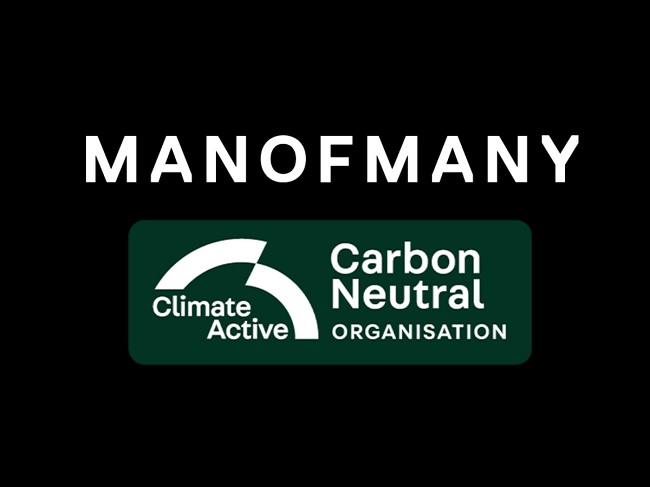 Man of Many — Climate Active Certified

Man of Many achieved the certification by establishing a carbon offsetting strategy while further cementing its commitment to reduce emissions in future years with the support of independent consultants Pangolin Associates.

The Climate Active certification is a partnership between the Australian Federal Government and Australian businesses that supports voluntary climate action. According to Climate Active, certification is awarded to businesses that “have credibly reached net zero emissions” by independently calculating their greenhouse gas emissions, reduced these emissions “as much as possible” and have “offset any remaining emissions by purchasing carbon offset units.”

Commenting on the announcement, Man of Many’s co-founder Scott Purcell said, “As we regularly feature and promote sustainable practices, conscious consumption and ethical businesses as part of our news coverage, we felt it was important for Man of Many to stand by these values ourselves and ‘walk the talk.’ We’re extremely proud to be the first digital publisher in the country to be 100% carbon neutral in contributing to a more sustainable future.

“We also felt it was important that we chose a local carbon project that aligns with our values and supports environmental, economic, cultural and social benefits here in Australia.”

As part of the strategy, Man of Many selected a local indigenous carbon project to offset its emissions. The Merepah Fire Project is run through the Aboriginal Carbon Foundation which catalyses life-changing, community prosperity, through carbon farming. The Merepah Fire Project involves strategic fire management, including aerial and ground burning as well as fire suppression to reduce late dry-season wildfires, in turn decreasing carbon emissions. Through the project, Traditional Owners have established sound management and governance and have improved job prospects with career pathways, whether as workers in the cattle industry, as rangers protecting cultural or natural assets, or as fire management operators.

In early 2022, Man of Many conducted a brand rediscovery project to reaffirm its purpose statement, vision, and values. An outcome of this exercise was a renewed emphasis on making positive investments in the community. As a result, Man of Many has made a commitment to significantly raise its environmental, social, and governance standards through active involvement in initiatives that affect real change.

The carbon neutral certification follows the announcement of Man of Many’s partnership with Australian mental health surf therapy charity Waves of Wellness Foundation and an impressive period for the media company, which received Highly Commended recognition in the Media Brand of the Year category at the 2022 Mumbrella Awards, alongside receiving eight nominations for the Mumbrella Publish Awards in 2022.

Purcell commented, “By being part of the collective solution to climate change, which is an important issue for our readers, we are staying true to our values — backing up everything we do with substance and consideration.”

Source: Man of Many via GLOBE NEWSWIRE