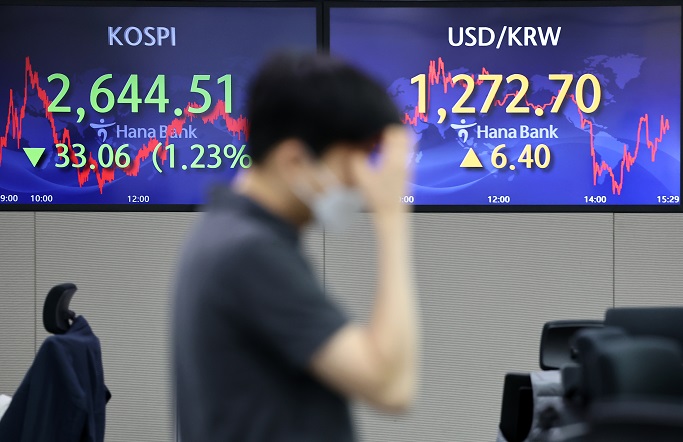 SEOUL, May 23 (Korea Bizwire) — The collapse of an asset market bubble in South Korea could lead to a more dangerous situation than the crash of the country’s information technology (IT) bubble in the early 2000s, market experts warned Monday.

Their doomsday scenario comes amid warnings that a U.S. stock market bubble has begun bursting in the wake of the Federal Reserve’s aggressive monetary tightening to fight soaring inflation.

“Their collapse could bring more serious consequences than the dot-com bubble burst in 2000, the property crash in 2008 and the fallout from the 2020 COVID-19 outbreak. South Korea could undergo unheard-of asset price tumbles,” he said.

The bond market bubble has already popped, the equity market is in the process of collapsing, and sharply increased property prices could plunge soon, the professor warned.

“Stock prices could remain range-bound for three to four years after going south following a one-time rebound, with the real estate market likely to enter into a correction period following a 20-40 percent tumble,” he said.

A bubble refers to fast increases in asset prices, which don’t align with fundamentals, and is followed by a quick decline in value.

During the 2000 collapse of South Korea’s IT bubble, the benchmark index for the country’s tech-laden KOSDAQ market nose-dived 82 percent over a nine-month period.

In the heat of the 2008 global financial crisis sparked by the collapse of the U.S. housing market, property prices in Asia’s fourth-largest economy tanked nearly 40 percent from their highs.

Hwang Se-woon, a senior researcher at the Korea Capital Market Institute, chimed in with professor Kim, saying the cryptocurrency market, which has attracted large amounts of investor money, resembles the country’s dot-com bubble.

“Prices of major cryptocurrency bitcoin could halve down the road, and the country’s key stock price index could drop to about one-third of its all-time high,” the analyst said. 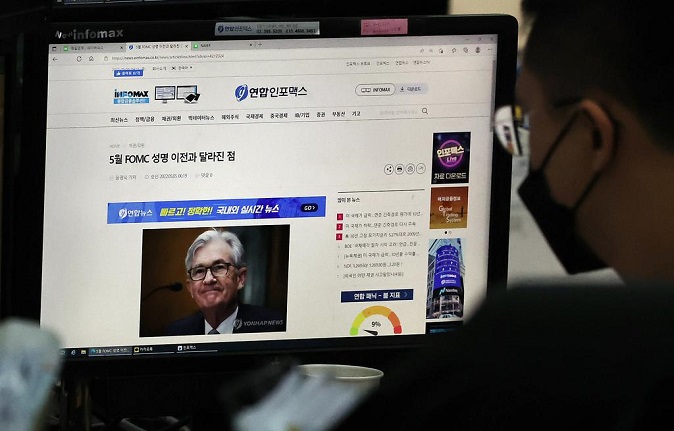 A currency trader reads a news report on the U.S. Federal Reserve’s decision to raise key interest rates by half a percentage point at the dealing room of Hana Bank in Seoul on May 6, 2022. (Yonhap)

The benchmark Korea Composite Stock Price Index (KOSPI) soared to a record high of 3,305.21 on July 6, 2021, on the back of brisk buying by foreign investors and domestic institutions.

Lending power to pessimism is monetary tightening in the United States and other major economies, which are widely expected to siphon off market liquidity down the road and send asset prices down.

In May, the Fed carried out a “big-step” 50-basis-point rate hike, and it has opened the possibility of the same moves in June and July. Market watchers forecast the U.S. central bank to raise the federal funds rate, which ranges from 0.75 percent to 1 percent, to as high as 3 percent in the coming year.

In South Korea, the central Bank of Korea (BOK) is projected to jack up its policy rate to 2.5 percent from the current 1.5 percent.

The BOK raised its policy rate by a quarter percentage point to 1.5 percent during its April meeting, the fourth increase since August last year, and it is predicted to deliver a back-to-back hike in its policy meeting set for Thursday as part of its efforts to rein in inflation.

Yet other analysts dismissed such warnings as premature, citing possible improvements in external conditions and the effect of property policies of the new Yoon Suk-yeol government that took office May 10.

“I hope the KOSPI will make a slow recovery down the road,” Korea Investment & Securities analyst Kim Dae-joon said. “The index could seesaw in May and June but rebound gradually in the second half of the year due to the easing burden of monetary tightening.”

Na Jeong-hwan from Cape Investment & Securities forecast the KOSPI could recover to the 3,000-point range under the best scenario that the war between Russian and Ukraine could come to an end within the second quarter of the year, with China’s zero-coronavirus policy helping ease its supply chain disruptions.

Some watchers also said it remains to be seen where the country’s property prices will head as the new administration has vowed to lower related taxes and ease market regulations, even though the real estate market remains frozen.