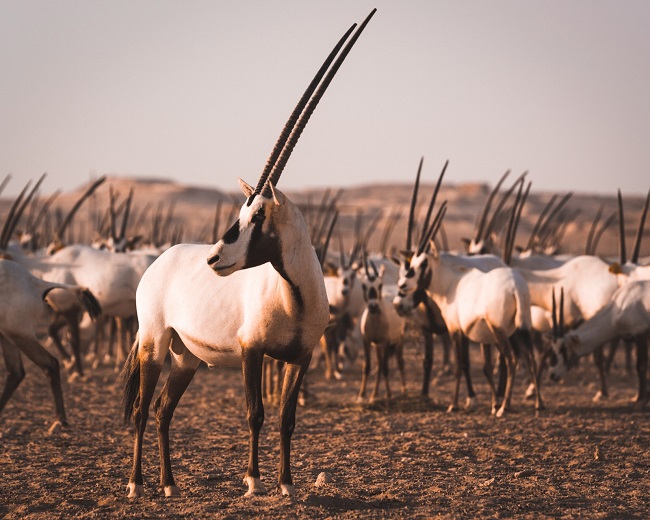 Despite its small size, Qatar is home to an abundance of interesting land and aquatic creatures that make up the country’s diverse ecosystem. Home to many nature reserves, the peninsula puts great emphasis on preserving and developing local wildlife to protect it from extinction.

Chief Operating Officer of Qatar Tourism, Berthold Trenkel, said: “Visitors will be amazed by just how many interesting and unique animals there are here. Qatar is home to dolphins, falcons, sand cats, and the red fox, among many more. We are home to a plethora of amazing animals, birds, and fantastic fauna, many of which are indigenous – visitors just have to know where to look for them.”

Here is a list of the six most unexpected animals in Qatar and where to find them:

With long spear-like horns, the Arabian Oryx is one of four species of antelope that lives in Qatar’s desert and is native to the Arabian Peninsula. It is also the national animal of Qatar.

This majestic creature used to be on the verge of extinction, but after immense conservation measures taken through Operation Oryx, the animals were reintroduced into the wilderness in 1982.

Visitors can visit the Arabian Oryx at the Al-Maha sanctuary, also called the Arabian Oryx Sanctuary. They can also be seen at Al Sheehaniya Reserve — located 45 km to the west of Doha — and Al Mashabiya Reserve in south-west Qatar, at country’s the oldest natural reserves.

Azzam Al Mannai, a Qatar-based wildlife photographer, says: “No picture can do the Arabian Oryx justice. I have been photographing them for the last three years and they always continue to amaze. They can be found in many natural reserves around Qatar and are known as ‘Al Wudhaihi’ due to their pure white colour. A truly beautiful creature.”

These grand aquatic creatures, often referred to as ‘gentle giants’ have been endangered since 2002. As the largest fish in the world, they can grow up to 20 metres long, and often migrate around the globe in search of tropical waters.

Qatar hosts one of the largest gatherings of whale sharks on the planet, appearing from April to September off the northeast coast of the Al Shaheen restricted marine zone.

Brigadier General Mohamed Al Jaidah, the lead whale shark research scientist in Qatar, says: “As an endangered species, conservation and protection of the whale sharks is our number one priority. We have been studying them extensively for the past 11 years in Qatar trying to understand more about them and their habitat.”

“Every year hundreds of majestic whale sharks congregate in Qatari waters to fine-dine on tuna eggs, essentially a caviar. I have seen up to 360 whale sharks at once. You see the fins, the tails, they’ll be under the boat, swimming, next to you, in all sorts of different locations.”

Known as the ‘sea cow’, these vulnerable species are in decline and are classified as vulnerable to extinction by the International Union for the Conservation of Nature.

Home to the second-largest population of dugongs globally, Qatar’s continued efforts to study and protect marine mammals resulted in a rare sighting of a group of 840 dugongs in 2020. Often seen to gather north of the peninsula’s shores between January and early March, these sea mammals can be found in large herds, which is not common behaviour for this sea mammal.

Mehsin Al-Ansi Al-Yafei, Associate Professor of Environmental Sciences and dugong researcher, says: “What’s amazing about the dugongs of Qatar is we’ve seen gatherings of over 800 in one day over my past two years of research. Something that hasn’t been seen anywhere else in the world. They feed on the seagrass and have been swimming around the Arabian Gulf for more than 7,000 years. I have been studying marine life in Qatar since 2002 and am always amazed by the different creatures that call this country home.”

The 560 km coastline of Qatar is home to one of the largest and most important nesting habitats for the hawksbill sea turtle in the region. Critically endangered, they are considered by many to be the most beautiful of sea turtles for their colourful shells.

As the hawksbill turtles are popularly known to visit Fuwairit beach during their nesting season, the beach undergoes a cleaning campaign as part of the turtle protection project, before the area is closed off to the public for the nesting season. Last year was also the first time the public were allowed to witness the miracle of life during the hatching season, under the umbrella of Qatar Museums, in collaboration with the Wildlife and Protection Department of the Ministry of Municipality and Environment.

Hundreds of flamingos make the northern Qatari wetlands their home for up to six months as they migrate from Europe in search of warmer climates. They may be spotted from the air during a flying tour of the Al Thakira Mangroves. BirdLife International, which aims to protect the habitats of migratory birds, works actively in Qatar to ensure it is a hospitable environment for these annual colourful visitors.

Don’t be swayed by its size, the honey badger is one of the world’s toughest animals. It doesn’t start fights it can’t finish, and it makes an impressive foe. It has also been known to take on hyenas, leopards, lions, and pythons. Its scientific name is ‘ratel’, but it is commonly-called the honey badger since it is known for taking on a full hive of bees to taste its favourite snack. The animal can also turn around in its own loose skin to easily break free from predators, for a quick surprise attack.

Sightings in Qatar have been reported from Zuwair, Ilham, and Al Haym southwest Al Shammal.

To find out more information about animals in Qatar please visit http://www.visitqatar.qa or download the app via the App Store or Google Play.

Qatar is a peninsula surrounded by the Arabian Gulf in the heart of the Middle East, with 80% of the earth’s population within a six-hour flight. Ranked the safest country in the world in 2020 by Numbeo, Qatar welcomes all travellers, and guests from over 85 countries can enter visa-free. Qatar has an incredible variety of easily accessible tourist attractions, a plethora of fauna and flora including Whale Sharks and the majestic national animal the Arabian Oryx, and most experiences are a unique combination of cultural authenticity and modernity. From iconic museums to high-rise restaurants, from thrilling desert adventures to world-famous events including none other than the FIFA World Cup Qatar 2022™, there is something for all types of travellers and budgets.

Qatar Tourism is the official government body responsible for the development and promotion of tourism in Qatar, facilitating the sector’s exponential growth. Qatar is a destination where people of the world come together to experience unique offerings in arts, culture, sports, and adventure, catering to family and business visitors, rooted in Service Excellence. Qatar Tourism seeks to boost the entire tourism value chain, grow local and international visitor demand, attract inward investment, and drive a multiplier effect across the domestic economy. The Qatar Tourism Strategy 2030 sets an ambitious target to attract over six million international visitors a year by 2030, making Qatar the fastest growing destination in the Middle East.