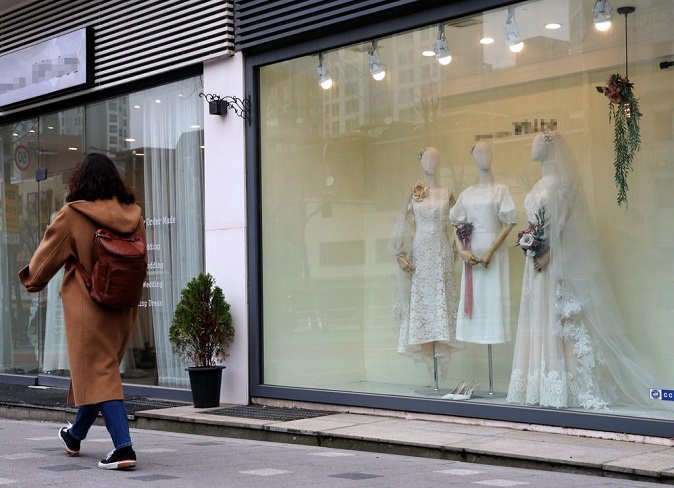 This photo shows a street of wedding dress shops in Seoul on March 17, 2022. (Yonhap)

The Korea Institute for Health and Social Affairs conducted a survey of men and women between 19 and 49 years of age (7,117 men and 7,032 women), asking them to choose from a list of nine factors that are important for making a decision about marriage.

The results showed that ‘love and trust between spouses’ was the most important factor for both men (92.4 percent) and women (94.9 percent).

As for the factors that followed, men considered first their financial status (84.1 percent), job (83.6 percent) and stable housing (82.3 percent).

“This shows that our society still believes in the traditional gender roles that men are in charge of the household income and women in charge of family rearing,” experts said.

At 56.3 percent, more than half of men had positive views about marriage, while only 35.5 percent of women shared the same view.

While 41.3 percent of men had negative views about marriage, a whopping 62.8 percent of women disapproved of marriage.

At 71.2 percent, more than two-thirds of men wanted children, while 64.3 percent of women shared the same view.