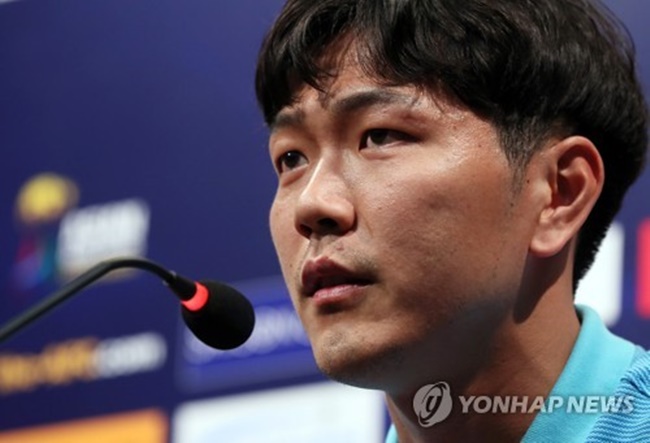 After South Korea ended in a scoreless draw with Iran at Seoul World Cup Stadium on Thursday, Kim said he had difficulty communicating with his teammates on the pitch because of the loud cheering.

Kim faced a quick backlash for his words with fans criticizing him for being ungrateful for support. Seoul World Cup Stadium drew 63,124 fans, the ninth-largest crowd at the 66,704-seat venue.

“I didn’t have any malicious intention when I said it,” Kim told reporters at Incheon International Airport while fighting back tears. South Korea left for Tashkent for their final World Cup qualifier against Uzbekistan next Tuesday.

“If I had meant anything bad I wouldn’t be standing here today,” he said. “I was only talking about the difficulties of the match. If anyone felt upset and offended by what I said I’d like to apologize.”

When asked by a reporter after Thursday’s match what challenges he faced on the field, Kim said he and his teammates couldn’t hear each other well.

“It was quite difficult to communicate with the guys because it was noisy out there,” Kim said at the time. “We could yell all we wanted and still couldn’t hear each other well. We prepared ourselves for a situation like this, but it was still frustrating that I couldn’t hear the guys.”
Kim said he’s now worried that his slip of the tongue may affect the mood in the locker room.

“This is my problem only,” he said. “I’ll try to make sure this doesn’t affect how we fare against Uzbekistan.”

South Korea are in second place in Group A of the final Asian qualifying round with 14 points, two ahead of Syria and Uzbekistan. Syria occupy the third place thanks to their tiebreaking edge in goal difference.

A win on Tuesday will send South Korea to their ninth consecutive World Cup but a draw or a loss will require some complicated number-crunching.