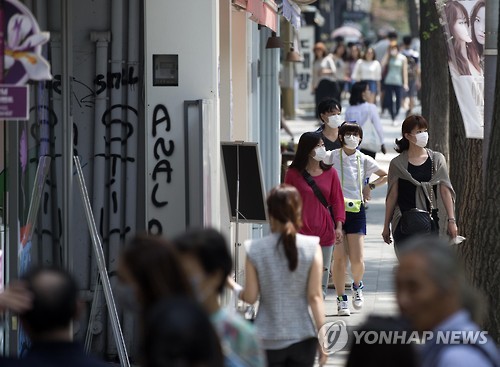 Morgan Stanley projected South Korea’s annual economic growth to fall by 0.15 percentage point if the MERS outbreak fizzles out within one month, according to the report by the Korea Center for International Finance. The scope of the fall is likely to increase to 0.8 percentage point if it lasts for three months.

For the month of June, Morgan Stanley estimated retail and tourism sales to contract 10 percent and 20 percent, respectively.

South Korea has emerged as the world’s second-most MERS-infected country after Saudi Arabia, with the number of infections hitting 108 since the outbreak was first confirmed on May 20. As of Tuesday morning, nine fatalities have been reported and 2,892 people were quarantined for possible infection.

Barclays Capital, meanwhile, cut its estimated contribution of the tourism industry on growth by 0.14 percentage point to 0.05 percent and projected gross domestic product loss at US$2 billion, according to the report.

The figures are seen as bolstering the case for another rate cut, with the Bank of Korea (BOK) scheduled to hold its monthly rate-setting meeting on Thursday.

While critics have raised concerns that an additional rate cut will further stoke household debt, some have been pressing the BOK to take action as the respiratory disease is feared to hurt domestic demand on the brink of recovery.

In a survey by Yonhap Infomax, the financial news arm of Yonhap News Agency, nine out of 17 market watchers forecast the BOK will slash the key rate to a new record low of 1.5 percent in the June meeting.