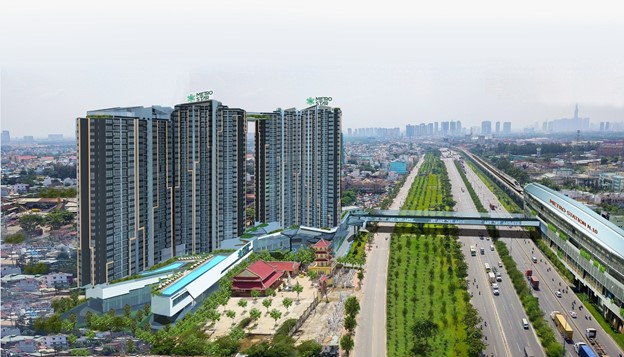 HO CHI MINH CITY, Vietnam, Dec. 4 (Korea Bizwire) — With the superior advantage of being a unique location right at the largest roundabout on Hanoi Highway, close to District 2, on the most beautiful Boulevard in the East of Saigon, connecting to Ring 2 via Pham Van Dong and Mai Chi Tho Boulevards, it is very fast and convenient to go to the directions of East, West, South, North. In particular, Metro Star is also a rare project with a pedestrian bridge that connects directly with Metro Station No. 10 to central stations of District 1. Moreover, Metro Star also possesses a great attraction when it converges Singaporean design quintessence inspired by Gardens by the Bay and a green living space of Singapore – the lion island nation, which is very effective and close to Vietnamese people; there is a unique shopping – entertainment – food street according to the model of Meyongdong Street (Korea) appeared for the first time in Vietnam, etc. All of them promise to create the most outstanding feature for Thu Duc young city and the East of Saigon.

Furthermore, there have recently been rumors that Metro Star at Metro Station No.10 will launch the second batch of selling units for only 61 million VND/m2 of an apartment and 121 million VND/m2 of a shophouse, which has piqued the interest of property purchasers. Besides, when compared to other projects in “Thu Duc City’s District 1”, the prices represent an excellent opportunity for homebuyers and investors.

With the commitment of construction of a floor for 6 days of the contractor CC14 (under Construction Corporation No. 1) and completed legal documents, the project will hand over the shop houses and apartments from the third quarter of 2022.