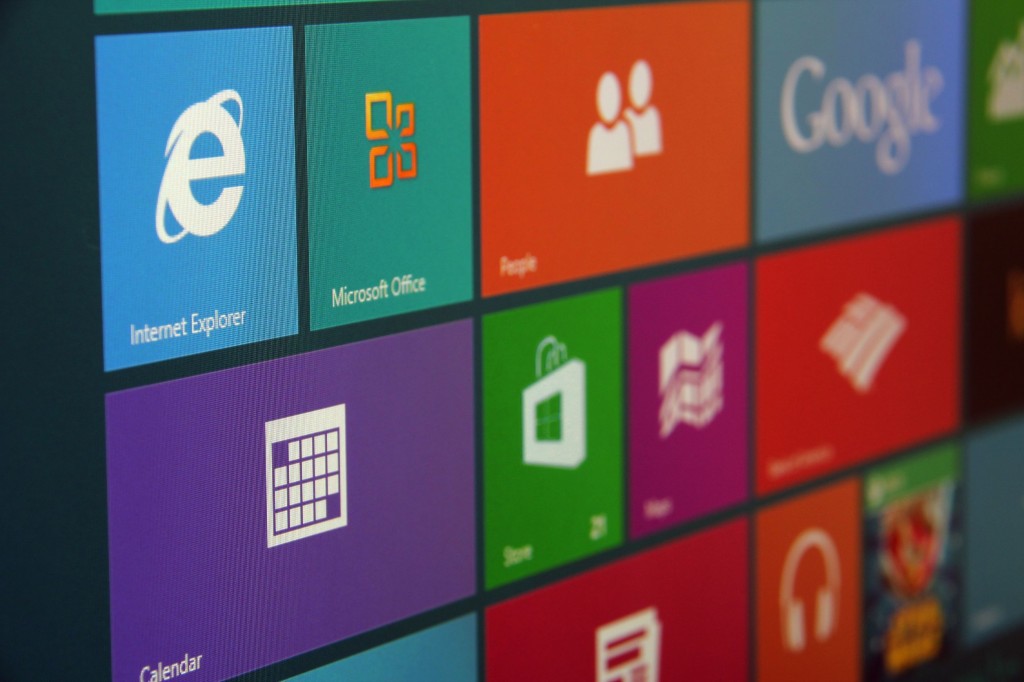 But XP refuses to die and remains number two globally despite end of support in April. (image:Windows 8 start screen shot at an angle by Kobizmedia/Korea Bizwire)

“Following a mixed reaction to Windows 8, perhaps because of its radical new look, Windows 8.1 appears to be winning over users”

The company’s research arm, StatCounter Global Stats also finds that despite Microsoft’s ending of support in April this year, Windows XP refuses to die and remains the world’s second most popular operating system version. However, for the first time globally, the combined total of Windows 8 and 8.1 (14%) overtook XP (12.9%) in August. (See downloadable chart: http://gs.statcounter.com/download/win8-combined.png).

StatCounter finds that Windows 8.1 worldwide has grown steadily to 7.5% in August ahead of Windows 8 (6.6%). The newer operating system overtook its sibling in the UK in April and in the US in May. The data covers desktop, tablet and console.

“Following a mixed reaction to Windows 8, perhaps because of its radical new look, Windows 8.1 appears to be winning over users,” commented Aodhan Cullen, CEO, StatCounter.

However, he added that the stubborn refusal of Windows XP to retire almost five months after the ending of non-paid support is a concern in terms of security and virus risks for remaining users.

Independent web analytics specialist StatCounter (www.statcounter.com) tracks millions of websites for companies, agencies, bloggers, self-employed, charities and anyone who wants to measure activity on their website, blog or forum. Key features include ease of use, independence and ability to view individual visitors in real time.

StatCounter recently announced a new feature in response to Google’s controversial removal of keyword data. By integrating Google Webmaster Tools (GWT) data into its reports, StatCounter has given its members the ability to analyze all available keyword data.

This means that members don’t have to separately access GWT, download the data, merge with other keyword reports and analyze the combined information. Instead, StatCounter members can access all available keyword intelligence and slice and dice this all within their StatCounter account.

StatCounter Global Stats data is based on over 15 billion page views per month to over three million websites.

*Microsoft assigned a new and distinct user agent to Windows 8.1 compared to Windows 8. For this reason, the two operating systems are separately reported on StatCounter Global Stats.