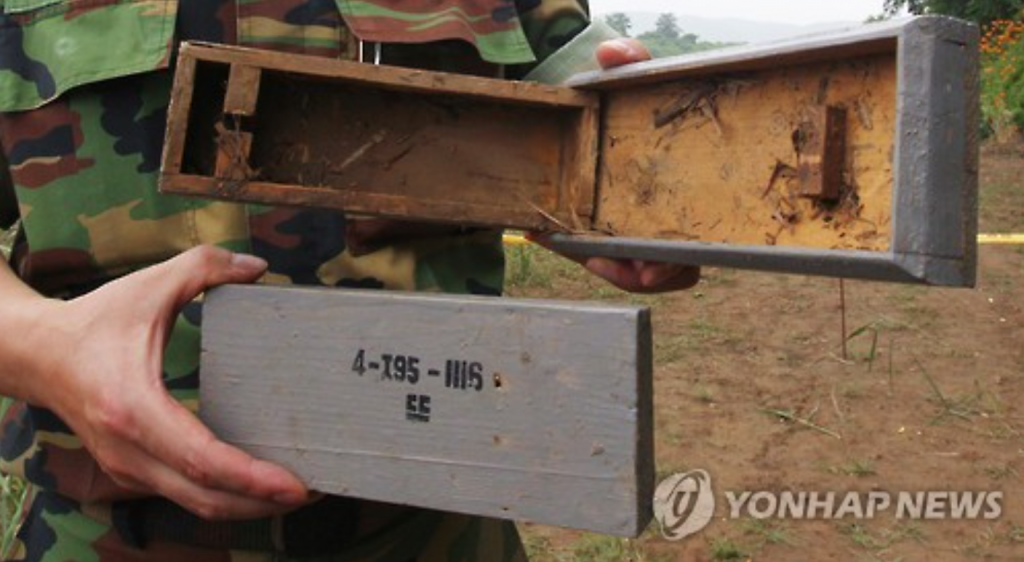 Since April, the North has placed more than 4,000 new land mines in the DMZ, and 70 to 80 percent of them are believed to be wooden-box land mines which are hard to detect using conventional mine detecting gear, according to the officials. (image: Yonhap)

SEOUL, July 6 (Korea Bizwire) – The South Korean military said Wednesday that it has found nearly 260 wooden-box North Korean landmines washed up along the inter-Korean border region between 2010 through 2015.

The military said it counted 259 landmines that were presumably buried by the North but were swept away due to heavy rains and flooding over the years.

In the summer months, wooden-box land mines that can float sometimes make their way south due to elevated water levels.

“There is a high possibility that the North’s landmines can reach South Korean territory,” a South Korean military official said.

The North Korean military is also suspected of deliberately releasing some of the mines found so they can be washed away by torrential rains. This concern is causing the military to keep close tabs on North Korean activities, the source said.

A South Korean man was killed in July 2010 when a wooden-boxed land mine he found in the Imjin River exploded. The river roughly flows along the boundary of the two Koreas. Land mines have also been found in the estuary region of the Han River and as far away as Gyodong Island between the two Koreas.

North Korea is believed to have significantly increased the number of land mines it has planted in the Demilitarized Zone (DMZ) that bisects the Korean Peninsula this year, other South Korean officials said. In August last year two South Korean soldiers were seriously injured by a land mine explosion at the DMZ that Seoul claim was planted by North Korea.

Since April, the North has placed more than 4,000 new land mines in the DMZ, and 70 to 80 percent of them are believed to be wooden-box land mines which are hard to detect using conventional mine detecting gear, according to the officials.

Millions of land mines have been buried on the divided peninsula during the 1950-53 Korean War and afterwards, particularly in the DMZ.

The two Koreas still remain technically at war since the three-year war ended in a truce, not a peace treaty.