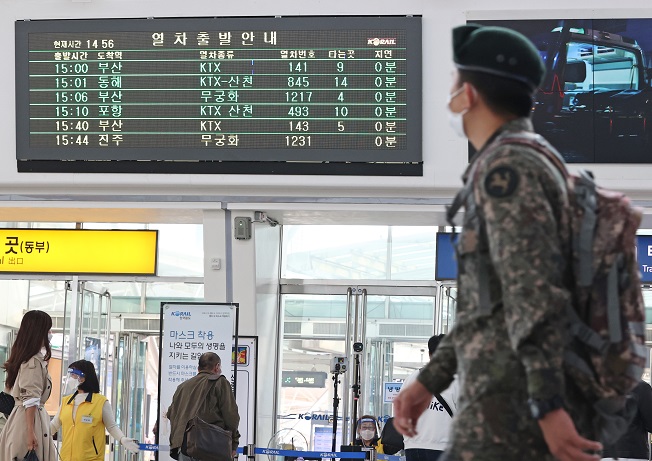 A service member moves to board a train at Seoul Station in the capital city on Oct. 12, 2020. (Yonhap)

Since mid-August, the military authorities banned rank-and-file troops from vacationing and off-base movement, as the country saw a surge in confirmed COVID-19 cases and implemented a tougher social distancing scheme.

However, as the guidance was adjusted to the lowest level starting Monday following a slowdown in new cases in recent weeks, the defense ministry decided to begin allowing service members to go on vacation normally starting Monday, according to the officials.

“We will have service members fully follow antivirus measures over the course of their off-base trips,” deputy spokesperson Col. Moon Hog-sik told a regular briefing.

“We will recommend troops to postpone their vacationing if they are stationed in regions that report confirmed cases,” Moon said, adding that some restrictions on their one-day off-installation travel and meeting outside visitors will remain in place as part of continued efforts to stem the spread of the virus.

On the same day, a soldier based in Yangju, north of Seoul, tested positive for the new virus, raising the total caseload reported in barracks to 154.

The soldier was in quarantine after four other service members at his unit tested positive.

The newly confirmed patient tested negative on an initial coronavirus test conducted following the series of infections, but he tested positive earlier in the day after showing symptoms, such as a headache, on Sunday, officials said.

Nationwide, the country reported 97 new virus cases, including 68 local infections, raising the total caseload to 24,703, according to the Korea Disease Control and Prevention Agency (KDCA).