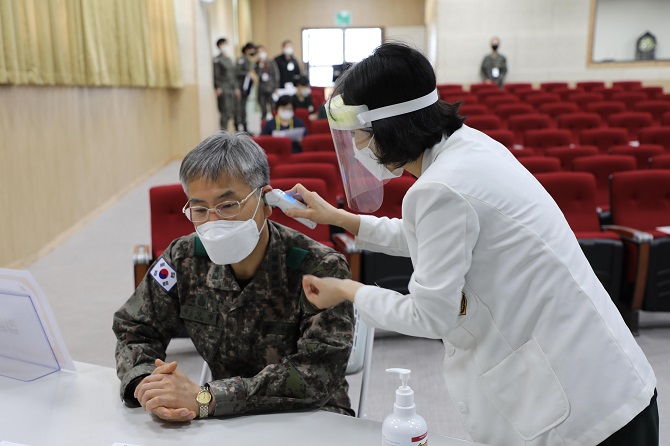 Col. Kim In-young (L), who is the chief of the Korean Armed Forces Yangju Hospital in Gyeonggi Province, has his temperature checked ahead of receiving the COVID-19 vaccine on March 3, 2021, in this photo provided by the defense ministry.

SEOUL, March 15 (Korea Bizwire) — Military personnel will begin receiving coronavirus vaccines starting in June, with those serving in inter-Korean border areas and at command and control centers to be high on the list, officials said Monday.

Under the inoculation plan, the defense ministry began administering COVID-19 vaccines this month, and around 2,400 military doctors and other healthcare workers in the military became the first recipient group.

Around 581,000 rank-and-file soldiers and military officers were supposed to be inoculated starting in the third quarter, but the authorities decided to advance the plan to administer the vaccines beginning in June in phases, the officials said.

They will get AstraZeneca vaccines, they added.

“Mission critical members, such as those in command and control centers, service members working at guard posts or in remote areas, and those serving aboard vessels, among other groups, will get a shot first,” a ministry official said.

Starting Monday, the ministry extended its Level 2 social distancing scheme for the military for another two weeks amid a series of confirmed cases among its members across the country.

The scheme bans service members from one-day off-base trips and meeting outside visitors at their bases.

But soldiers are allowed to go on vacations while strictly adhering to antivirus measures, such as a mandatory quarantine and coronavirus tests. Up to 20 percent of members of each base can take leave at the same time, according to the ministry. 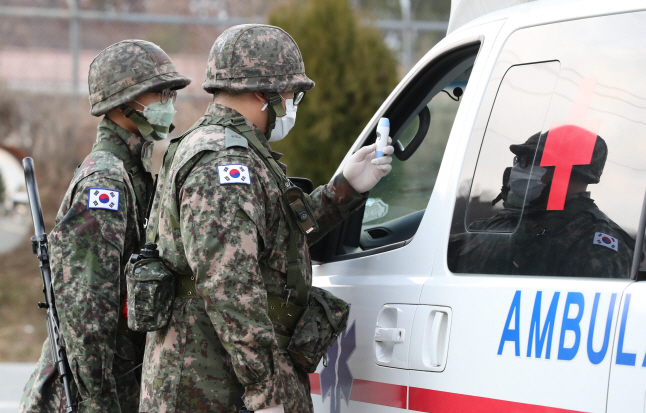 In this file photo, taken on Feb. 26, 2020, troops belonging to the Army’s 50th division check the driver of an ambulance for fever near its base in northern Daegu, 300 kilometers southeast of Seoul. (Yonhap)

Over the weekend, the military reported five new COVID-19 cases, which brought the total caseload at barracks to 622.

The officer stationed in the southeastern city of Daegu was confirmed to have been infected in a test required to exit quarantine, as he has been in isolation after one of his family members tested positive earlier, according to the ministry.

One Army draftee in the border town of Goseong and the other one in Yeoncheon each tested positive while on vacation, it added.