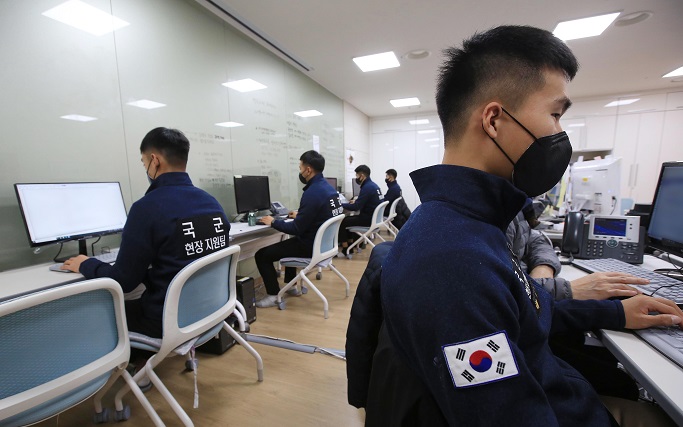 In this file photo taken on Dec. 14, 2020, special warfare soldiers input data at a health center in Seoul as part of efforts to assist the government’s epidemiological survey in the fight against COVID-19. (Pool photo) (Yonhap)

SEOUL, Feb. 1 (Korea Bizwire) — The military decided to partially allow vacations for new recruits as part of efforts to ease the stress of troops amid an extension of toughened social distancing in barracks for another two weeks, the defense ministry said Monday.

Since November, the ministry has enforced Level 2.5 social distancing rules, the second highest in its five-tier alert system, following a series of COVID-19 infections across the country.

Under the social distancing scheme, troops’ vacations and one-day off-installation trips are restricted, among other things.

The rules will largely remain in place, but service members who joined the military before October last year and have not had a chance to go on vacation until now will be allowed to do so, the ministry said.

The decision was made to ease troops’ stress, considering that the military has been imposing strong health protection guidelines in barracks compared to civilian society.

The partial resumption of vacationing will come along with various antivirus measures, including a two-week quarantine upon their return from vacation and coronavirus tests, to prevent a possible spread of the virus in barracks.

The ministry said it will also allow officers to have private gatherings as long as they abide by the health authorities’ broader rules that ban gatherings of five or more people.

“The defense ministry will do its best to maintain the military’s combat capabilities and prevent the spread of the virus in the local community and among the service members by strictly following the government guidelines while providing measures to ease the troops’ stress level,” the ministry said in a release.

On Monday, the ministry said a full-time reservist in Seoul tested positive for the virus, bringing the total infections reported among the military population to 548.

The government earlier said it will extend the current Level 2.5 social distancing rules in the greater Seoul area and Level 2 in other regions until Feb. 14.