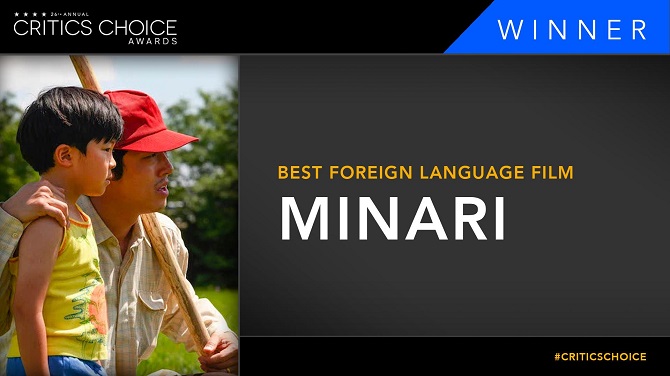 This image from the Twitter account of the Critics Choice Association announces “Minari” as the winner of best foreign language film at the 26th annual Critics Choice Awards on March 7, 2021.

In the awarding ceremony of the annual 26th Critics Choice Awards held Sunday (U.S. time), the best foreign language film award went to “Minari,” directed by Korean American Lee Isaac Chung, beating “Another Round,” “Collective,” “La Llorona,” “The Life Ahead” and “Two Of Us.”

The director’s semiautobiographical film has received the honor given to the best non-English film of the year for two straight weeks following the one from the Golden Globe Awards last week.

Also, Alan Kim, who portrays the seven-year-old grandson, David, known to be the stand-in for director Chung, was the winner of the best young actor/actress category among five other youth nominees, including Helena Zengel from “News of the World.”

“Minari” was nominated in 10 categories of the Critics Choice Awards, including best picture, best director and best supporting actress, but it won only two of them.

Starring Steven Yeun, Han Yeri and Youn Yuh-jung, the movie tells the story of a Korean immigrant family that moves to Arkansas in the 1980s and sets up a farm to pursue their own American dream.

“Minari” is titled after the namesake watery vegetable used in many Korean dishes. It is tough enough to survive everywhere and robust in flavor, serving as a metaphor for the family who struggles and survives in the new world to realize their dream.