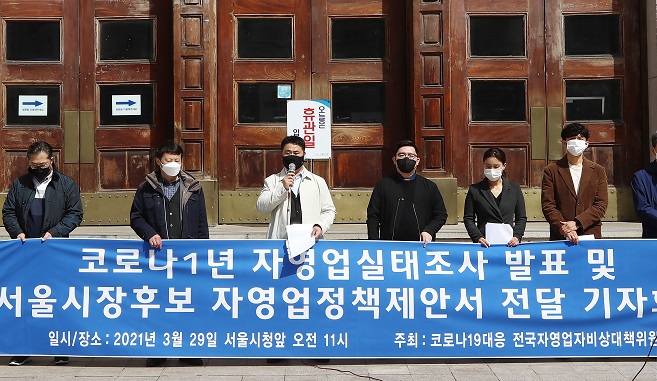 An association of mom-and-pop business owners holds a press conference in front of Seoul City Hall on March 29, 2021. (Yonhap)

The association held a press conference in front of Seoul City Hall to release the survey results, which was conducted on 1,545 self-employed workers nationwide from Feb. 5 to March 25 to see how badly the pandemic affected their businesses.

Compared to pre-pandemic days, 1,477 or 95.6 percent of the total respondents said they recorded a decrease in sales, which dropped 53.1 percent on average.

The slips were found to have been bigger for businesses operating in Seoul and its surrounding areas than those in other parts of the country.

Nearly 90 percent of the 1,545 respondents said their businesses were negatively influenced by state-led antivirus restrictions, such as limits on business hours and people’s gatherings.

More than 81 percent said their debts increased over the year to 51.3 million won (US$45,300) on average, while the number of their employees decreased to 2.1 from four in pre-pandemic days.

Amid anemic business performances, 689 people or 44.6 percent said they were considering permanent closure. Of those, 340 people said they would close their businesses in six months to one year.

Nearly half of the country’s self-employed and mom-and-pop businesses will be forced to shut down if the pandemic persists for another year, according to the association.

“The government should figure out the exact economic situations of those businesses and start to compensate them for the coronavirus-related business losses as long as the state budget allows,” the association demanded.