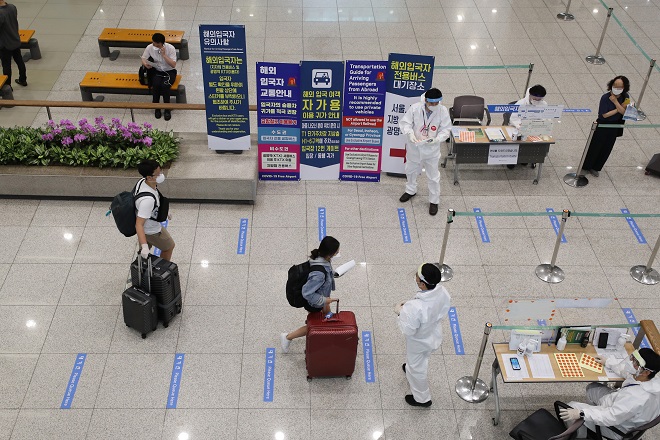 According to the state-run Korea Tourism Organization (KTO), the average number of foreign travelers here was only 9,722 per month from April to December last year, illustrating the drastic impact COVID-19 had on the local tourism sector.

The number of inbound tourists has yet to recover from the coronavirus crisis after hitting an annual low in April last year, the KTO said.

The monthly average of foreign arrivals represented less than 1 percent of the pre-coronavirus figures, which reached 1.03 million in January last year, for instance, it noted.

By nationality, visitors from China averaged 340 a month in the April-December period, while Japanese and Taiwanese visitors amounted to 42 each a month. Tourists from the United States came to 3,470 a month in the same period.

As COVID-19 spread around the world, China suspended all flights to South Korea, except for one route per airline, while Japan imposed entry restrictions on travelers from South Korea.

Notably, the number of foreign aircraft and ship crew members entering Korea averaged 26,160 per month from April to December, which was about 2.7 times higher than that of foreign tourists.

The KTO said the number of foreign arrivals may rebound this year, as South Korea considers introducing quarantine-free, international travel agreements with other countries under the so-called travel bubble scheme, as well as electronic vaccine passports called travel passes, amid the ongoing vaccination campaign worldwide.

A travel bubble is a quarantine-free travel partnership between two or more cities or countries with similar levels of COVID-19 cases.

Under the compulsory quarantine measures, all entrants from overseas — both Koreans and foreigners — are now obliged to self-isolate at their residences or government-designated facilities for 14 days.

“At the beginning of every year, we have set our annual targets for foreign tourists from each region,” a KTO official said.

“This year, however, it seems meaningless to set such targets because it is difficult to predict when international tourism exchanges will resume.”