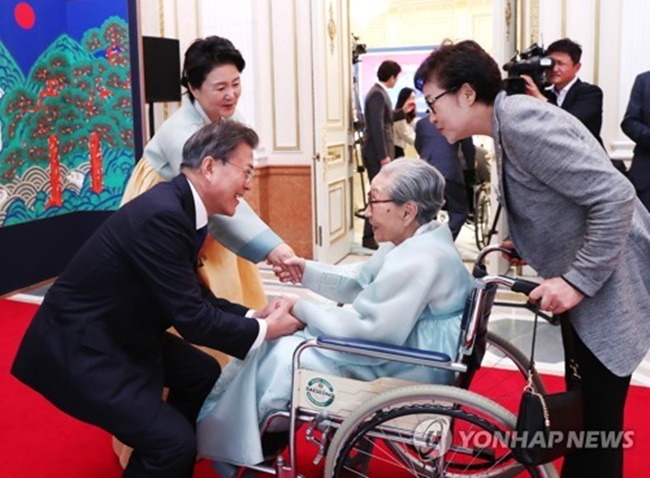 “Each and every person here deserves respect and gratitude. Thanks to your sacrifice, we are able to speak and write in our own language, enjoy our culture and live our precious daily lives,” the president said in a meeting with some 250 national heroes and their families. (Image: Yonhap)

SEOUL, Aug. 14 (Korea Bizwire) – President Moon Jae-in promised Monday to expand government support for national heroes, independence fighters and their families, noting the nation and its people are permanently indebted to them for their sacrifices that allowed the freedom they enjoy now.

“Each and every person here deserves respect and gratitude. Thanks to your sacrifice, we are able to speak and write in our own language, enjoy our culture and live our precious daily lives,” the president said in a meeting with some 250 national heroes and their families.

The meeting, held at the presidential office Cheong Wa Dae, came one day before the country celebrates the 72nd anniversary of its liberation from the 1910-1945 Japanese colonial rule.

The president said the government will inject an additional 50 billion won (US$43.9 million) to provide financial support to all of the offspring of independence fighters, noting that such support was currently available only to the one main descendant.

Citing the frequently uttered phrase that up to three generations of people who fought for national independence may live poor while those who collaborated with the Japanese colonial rule of Korea guaranteed wealth and prosperity for their offspring for three generations, Moon said he will make the notion go away.

New government measures, to be introduced Tuesday, will help ensure stable daily lives for those who fought for the country’s liberation and their families, according to the president.

“We came up with those steps with an aim to build a nation that pays its due respect” to national heroes, he told the meeting, according to Cheong Wa Dae.

The president also vowed early implementation of the new steps, saying when such additional support is provided is equally important as what will be provided, as only 58 out of some 15,000 independence fighters and national heroes are alive now.

Monday’s meeting was also attended by several forced laborers and sexual slaves forced into service by the Japanese colonial regime and military.

The new president also sought to put an end to a longstanding debate over when the country was founded, saying the country will mark the 100th anniversary of its foundation in 2019.

The former Park Geun-hye administration renewed the decades-old debate when it referred to the 1948 establishment of the government as the date of national foundation, sparking emotional reactions and even condemnations from many independence fighters and their bereaved families who insist the 1919 establishment of the Provisional Government of Korea in Shanghai must be recognized as the start of the country.

“We will prepare for the next 100 years while looking back at the past 100 years since the foundation of the Republic of Korea,” the president said, referring to his country by its official name.