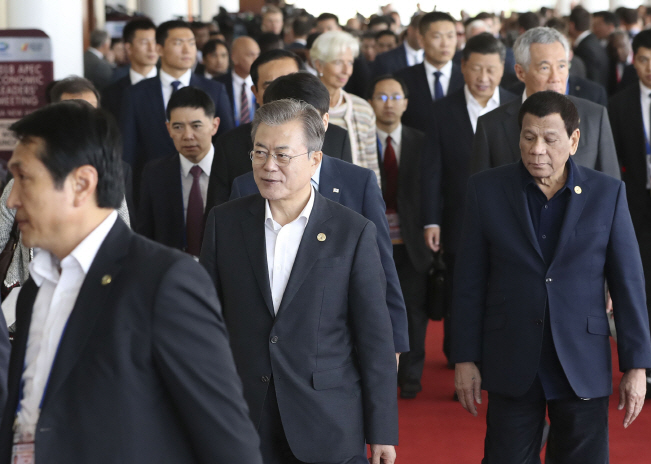 In an address to the Asia Pacific Economic Cooperation (APEC) summit in Papua New Guinea, Moon also presented his economic and social policies as an example for the APEC’s common goal of inclusive growth and reforms.

Under the theme of “Harnessing Inclusive Opportunities, Embracing the Digital Future,” the leaders of the 21 member economies discussed measures for deepening integration, nurturing inclusive growth and structural reforms and promoting digital economy.

As part of such efforts, Moon proposed a new APEC Digital Innovation Fund that “will serve as pump-priming water to induce the participation of economic players in each country and support the enhancement of capability of developing countries.”

“Korea promises to constructively contribute to the creation and operation of the APEC Digital Innovation Fund,” he was quoted as saying during the summit.

He shared the world’s most-wired country’s policies to support technology start-ups, reduce digital gaps and protect consumers on the Internet.

Moon also used the APEC address to reaffirm his resolve to contribute to advancing the goal of inclusive and sustainable growth in the region, the presidential office said.

“South Korea has achieved both economic growth and democratization fast but in the course, bipolarization and economic inequality have deepened,” he said. “To resolve the problems fundamentally, our government adopted a new national vision toward ‘an innovative, inclusive state.’”

He added the new policies aim to build a community “where all people live well together and to guarantee fair opportunities, just results and no discriminations across genders, regions, income classes and ages.”