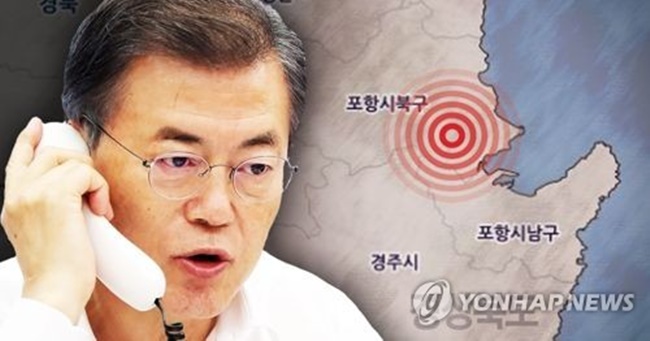 “I offer my word of consolation to residents of Pohang and surrounded areas affected by the quake,” the president said in a message posted on his Facebook account. (Image: Yonhap)

SEOUL, Nov. 16 (Korea Bizwire) – President Moon Jae-in on Thursday offered consolation to people displaced by the latest earthquake in the southeastern city of Pohang, pledging all-out efforts to help all those affected by the quake.

“I offer my word of consolation to residents of Pohang and surrounded areas affected by the quake,” the president said in a message posted on his Facebook account.

“The government will do its utmost to make sure those forced to leave their homes return at the earliest date possible,” he added.

The message came one day after a 5.4 magnitude quake struck the southeastern region, leaving around 50 people injured and dozens of homes destroyed.

The second most powerful quake recorded in the country also forced the government to postpone the annual college entrance exam, originally scheduled for Thursday.

“The government decided to postpone the exam yesterday, following a comprehensive review of the situation,” President Moon said.

“I understand how devastated our students and their parents must have been. I believe it was an inevitable decision for the safety of our children and fairness in the test,” he added.

The government earlier said it may consider designating the quake-hit area as a special disaster zone, which would entitle the region and its people to a range of government assistance.