SEOUL, Jun. 9 (Korea Bizwire) — Nearly a month has passed since the inauguration of President Moon Jae-in on May 10. Among the many adjectives used by the media to define Moon’s personality, “unauthoritarian” stands out.

Moon’s departure from the stereotypical authoritarian attitudes of a president became a hot topic in the news starting his inaugural day.

Following an unprecedented simple inauguration ceremony in the lobby of the National Assembly, Moon mingled unhesitatingly with ordinary citizens and parliamentary employees for photo and handshakes before boarding the presidential limousine.

While commuting from his apartment in western Seoul for several days due to renovations of the presidential residence, Moon also posed with a big smile with his neighbors for cameras every morning. 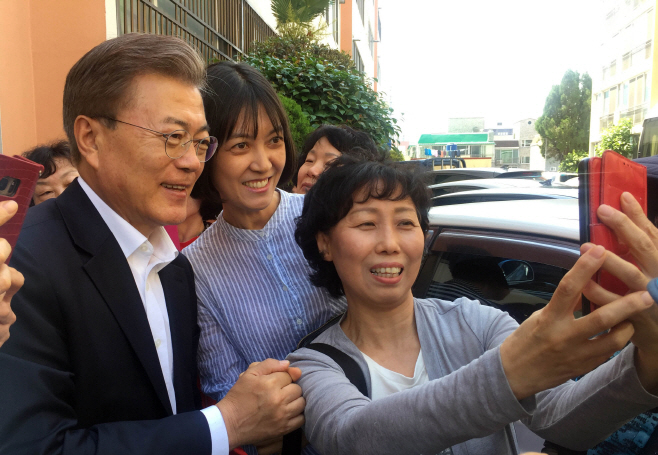 President Moon Jae-in poses with citizens during his visit to Busan on May 22, 2017. (image: Cheong Wa Dae)

Additional videos of the president and his secretaries sitting at a round table for lunch, grabbing a cup of coffee and taking a walk together at Cheong Wa Dae, the presidential office in Seoul, further impressed the general public.

On a recent day, Moon first approached and greeted children on a field trip to Cheong Wa Dae and waited patiently while a child took a notebook from a bag to get his autograph.

Judging from his humble and unauthoritarian gestures, Moon appears to be keeping his campaign promises to break with authoritarian presidential attitudes and become a “communicating president.” 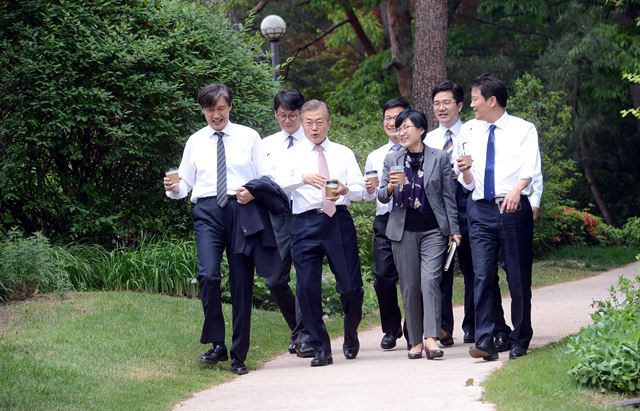 President Moon Jae-in (3rd from L) and his senior secretaries walk around Cheong Wa Dae, with coffees in their hands, on May 11, 2017. (image: Cheong Wa Dae)

In the survey conducted by Gallup on 1,004 adults from May 30 to June 1, 84 percent of respondents said they think Moon is “doing a good job.” Gallup said President Moon’s approval rating broke the record for all presidents, noting the previous record was set by then-President Kim Young-sam in June and September 1993 at 83 percent. Supporters cited Moon’s communication skills (18 percent), his personnel choices (10 percent) and overall job performance (8 percent).

Moon’s break with positional authority appears to stem from his belief that the owners of the country are the people.

Indeed, in a departure from national event protocol, rank-and-file soldiers wounded by border-area land mines were seated next to the president at a Memorial Day ceremony on June 6. Previously those seats were occupied by heads of the four branches of government.’

“The owner of the country is not the president, but the people. The event (and the different seating arrangements of the Memorial Day ceremony) was intended to remember or mourn the nation’s symbolic figures,” presidential spokesman Park Soo-hyun said in a press briefing.

Park then noted that presidential protocol will be changed at future national events.

Moon has also ordered that the presidential security service be overhauled in a “friendly, open and low-profile manner,” according to people close to the president. Prime Minister Lee Nak-yon told reporters last month that Moon had asked his chief bodyguard to loosen security services during his term. 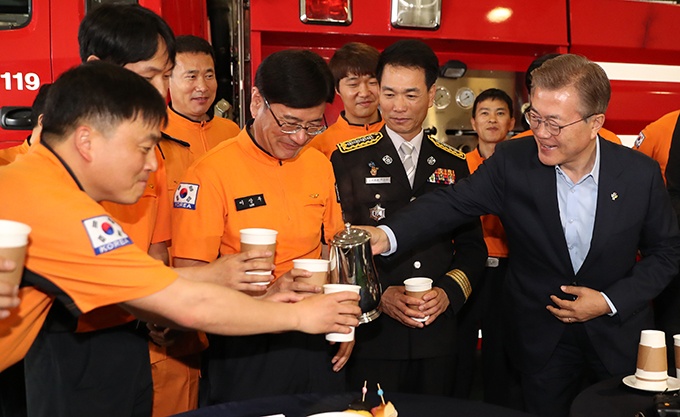 Moon’s office declared in late May that it will do away with three stereotypes at the president’s meeting with senior secretaries — hierarchy, dictation and a pre-set conclusion.

Moon and his secretaries were all casually dressed without ties and engaged in a heated debate about key state affairs. In the previous administrations, most Cheong Wa Dae secretaries were usually busy writing down the president’s words and instructions.

Moon’s efforts to communicate directly with the media are also noteworthy. His predecessor, Park Geun-hye, had rarely visited Chunchugwan, the press hall of Cheong Wa Dae, except for her new year’s press conference.

But Moon has visited Chunchugwan three times over the past month to announce his Cabinet and secretariat nominees and, in some cases, was asked unpredicted questions.

So far, Moon’s break with protocol and authority has been favorably received.

But political pundits caution that Moon’s unauthoritarian attitudes can be seen as mere populism if his government fails to come up with the visible outcomes anticipated by the public.

“If President Moon’s departure from authoritarian rule can overhaul the entire government’s organizational culture and improve productivity, it will be very helpful to state affairs. Otherwise, the president can be criticized for being overly concerned with image,” said a professor at a Seoul university.