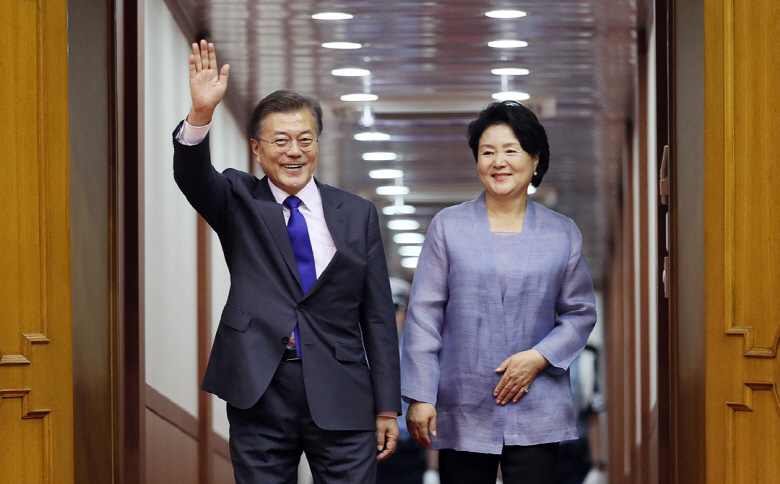 President Moon Jae-in and first lady Kim Jung-sook wave upon arrival at Seoul Air Base in Seongnam, south of Seoul, on July 10, 2017, after attending the Group of 20 summit in Germany. (image: Yonhap)

In the Realmeter survey conducted from Monday to Friday, Moon’s rating was tallied at 76.6 percent, up 1.3 percentage points from a week earlier.

Those who disapproved of his job performance comprised 16 percent, down 1.3 percentage points from the previous week, while 7.4 percent said they were unsure or refused to answer.

The pollster attributed the increase to Moon’s strong reaction to Pyongyang’s test-launch last Monday of an intercontinental ballistic missile and his diplomatic activities at the Group of 20 summit to address the North’s saber-rattling and promote peace on the peninsula.

The survey put the rating for the ruling Democratic Party at 53.4 percent, up 0.1 percentage point, while support for the main opposition Liberty Korea Party rose 0.3 percentage point to 16.2 percent.

The ratings for the Bareun Party and Justice Party were tallied at 6.6 percent and 6.2 percent, respectively.

The People’s Party ranked fifth with its support remaining unchanged at 5.1 percent. The party has been thrust into its biggest crisis after a party member was recently accused of doctoring an election-year accusation against Moon’s son.

The survey, commissioned by local broadcaster CBS, was conducted on 2,518 adults and had a margin of error of 2 percentage points, with a 95 percent confidence level.

In a separate Realmeter survey conducted Friday, 66.2 percent said that they support the peninsula peace initiative Moon announced Thursday during his attendance at the G-20 summit in Germany, while 22 percent disagreed.

Under the initiative, Seoul eyes Pyongyang’s denuclearization with a security guarantee, and economic and diplomatic incentives, while seeking a peace treaty and dismissing any pursuit of forced unification.

The survey commissioned by CBS was conducted on 505 adults. It had a margin of error of 4.4 percentage points with a 95 percent confidence level.