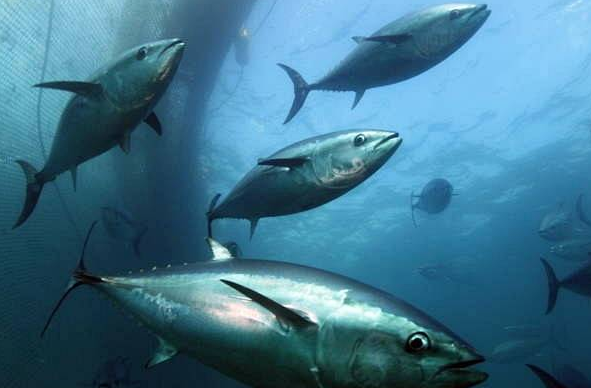 SEOUL, June 22 (Korea Bizwire) –  Sushi lovers in South Korea will be able to taste a new breed of tuna in local restaurants and gourmet shops as farm-bred bluefin tuna is coming to the market this year, the fisheries ministry said Friday.

Local fishermen have tried to cultivate bluefin, one of the most popular fish with its rich red meat, to meet the high demand, but their efforts were fraught with challenges like typhoons and cold winters.

After a lot of trial and error over the past decade, Hongjin Fishing Association said it succeeded in growing bluefin tuna in a pen in waters off Tongyeong, about 370 kilometers southeast of Seoul, over the last 22 months. The fish are as heavy as 30 kilograms and about 30,000 tons of them will be sold on the market later this year, it noted. 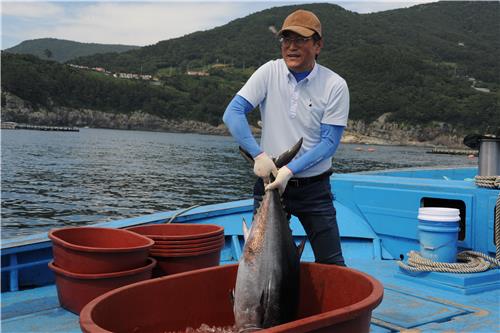 A fisherman catches a bluefin tuna farmed in waters off Tongyeong, 370 kilometers southeast of Seoul, on June 21, 2018, in this photo provided by the Ministry of Oceans and Fisheries. (Image courtesy of Yonhap)

The Ministry of Oceans and Fisheries said it will support research and development efforts to develop the fish farming business and expand related infrastructure and facilities needed for the mass commercialization of tuna bred in captivity.
“It has been proven that bluefin tuna can be cultivated in the domestic environment although temperature dips below 10 Celsius in winter,” the ministry said. “If large-scale tuna aquaculture is possible, it could help maintain the global stockpile of endangered bluefin tuna.”

If 85 percent of the bluefin catch is replaced with farm-bred fish, the ministry said it would create about 100-300 billion won (US$90-270 million) of economic benefits. Bluefin tuna accounts for less than 1 percent of the entire 5.79 million-ton tuna catch as of 2016, official data showed.