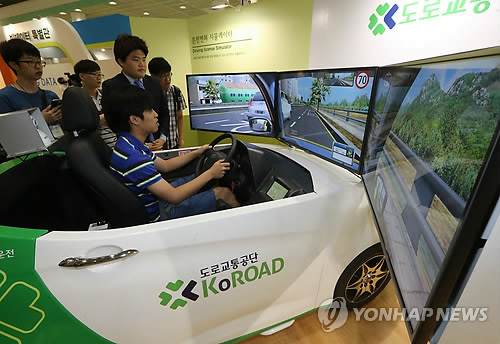 As the Korean government offers written test materials in 10 languages including Chinese, there are no language barriers, and according to the Chinese media, the on-road driving exam is so easy that “even a blind person could pass the test.” (image: Yonhap)

JEJU, July 21 (Korea Bizwire) – Jumping on the bandwagon of easy to obtain driver’s licenses, Chinese citizens are flocking to Korea to get their driving permits. With the resorts and tourist attractions on Jeju Island becoming particularly popular, more than 900 licenses have been issued to Chinese “tourists” who mix sightseeing with driving lessons.

According to The Beijing News, a Beijing based news agency in China, among the 1,093 foreigners who obtained driver’s licenses so far this year, more than 90 percent were Chinese. The total number of Chinese who received the licenses in Jeju last year was 991. In 2010, it was only 68.

The sudden increase in the popularity of obtaining driver’s licenses in Korea stems from the national government’s decision to relax restrictions on driving permits for foreigners in June 2011. The government cut the number of hours of training required to just 13, including six hours of driving time.

In addition, the cost of getting a Korean license is much lower. In China, it costs between 4,000 yuan and 5,400 yuan in large cities like Beijing. However, in Jeju, Chinese citizens can obtain driving permits for about half the price that they would have to pay in China.

A Chinese tourist who is taking the license test in Jeju said, “With the money that I’d have to spend for a driver’s license in China, I can get the permit and at the same time do some sightseeing in Jeju. Who would refuse such an offer?”

As the Korean government offers written test materials in 10 languages including Chinese, there are no language barriers, and according to the Chinese media, the on-road driving exam is so easy that “even a blind person could pass the test.”

The process of getting a driver’s license is the same for both Korean and foreign residents. Applicants must go through a set process, which includes attending traffic safety training, undergoing a physical, taking a written exam, completing a driving course test, and a final on-road driving test.

However, some worry that drivers who obtain the “quicker and easier” Korean licenses, might undermine safety on Chinese roads. The Chinese government even requested that the Korean government tighten license requirements for Chinese nationals last December. However, the Korean government replied that there is no legal regulation to limit foreign citizens’ applications for driver’s licenses.

Meanwhile, according to Korean law enforcement statistics, one year after the “simplification” of the driving permit process in 2011, the number of traffic accidents per 10,000 new drivers fell to 61.45 from 79.6 cases prior to the changes.