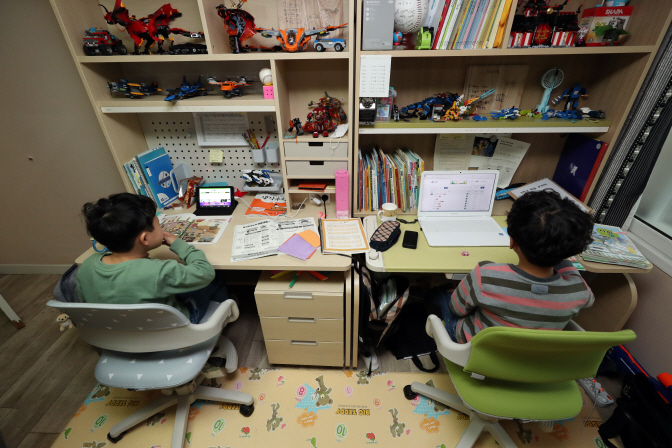 Two children, first and third graders, attend online classes via a tablet and notebook PC at their home in Gwangju, southwestern South Korea, on April 20, 2020. (Yonhap)

The move marks the full opening of the new school year with remote learning for about 5.4 million elementary, middle and high school students across the country.

Grades one to three at elementary schools began the new semester with online classes Monday under the government’s three-step plan to open the new school year depending on grades.

The new school year, which usually starts in March, was postponed by five weeks to April 6 over concerns that schools are vulnerable to cluster infections of COVID-19.

The plan was again put off by a few days to give schools time to prepare for remote classes.

As part of the government’s unprecedented move to open online classes nationwide, middle and high school students in their third and final year returned to school first on April 9.

A week later, the second group — first and second graders at middle and high schools, as well as grades four to six at elementary schools — followed suit. Kindergartens and child care centers have shut down indefinitely.

Education authorities plan to mostly use the networks of education-focused broadcaster EBS in case of first and second graders at elementary schools as they will have difficulty taking the initiative in learning and communicating with teachers via smart devices.

The websites of EBS and remote learning platforms provided by the government operated without major glitches, though the maximum number of their simultaneous log-ins reached more than 1.2 million Monday morning.

The government’s e-learning site recorded 620,760 concurrent users at 9:10 a.m. and EBS’ online class was simultaneously accessed by 601,396 students at 9:42 a.m., but no major connection errors occurred.

Some schools and students complained of delayed connections, though the problems do not seem to stem from the online learning platforms themselves. 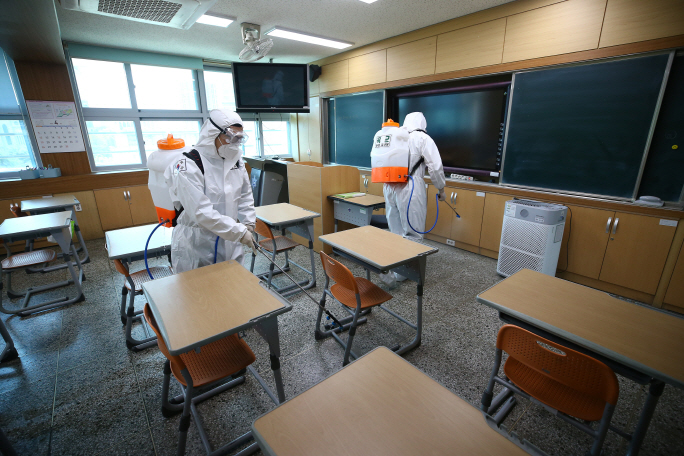 Military officials carry out a disinfection operation at a middle school in Daegu, some 300 kilometers south of Seoul, to prevent the spread of the new coronavirus. (Yonhap)

Moreover, a number of schools successfully completed their online classes by taking advantage of channels on YouTube with a much larger server.

Parents of young pupils, particularly those unfamiliar with smart devices, complained that they had to be with their children throughout the online classes to extend assistance.

A 42-year-old woman surnamed Cho in Jeonju, southwestern South Korea, said she took a day off to take care of her 9-year-old son, a third grader.

Cho said that while her son was watching the online class videos on YouTube and other devices, she had a busy morning checking on his progress and other situations.

“Students had to watch an ad before using online class videos. In addition, they couldn’t focus well because related videos are shown next to the screen,” she said.

Another parent in Icheon, Gyeonggi Province, said she was having a hard time taking care of her two children — first and sixth graders — during their online classes.

“The sixth-grade child has been given too many assignments, including picture drawing and poem writing, while the first grader was not able to cope with the remote learning on his own,” the parent said.

A housewife on Jeju Island said she was surprised to find her first-grade son watching the second-class video on EBS TV while lying down comfortably, as she was paying attention to his younger sisters.

“My son was frequently disturbed by his younger sisters aged 3 years old and 6 months old, respectively,” the housewife said.

A 42-year-old woman in Busan said she was embarrassed at work after receiving a phone call from her third-grade son who said he was not able to gain access to the government’s e-learning platform. 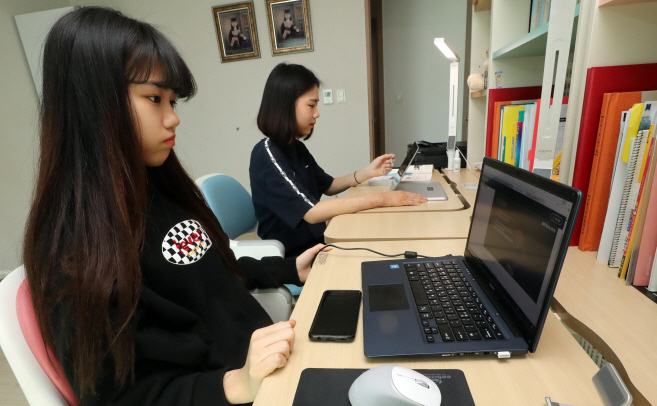 Twin sisters, both of whom are in grade three at middle schools, take online classes at home in Seoul on April 9, 2020, as South Korea began the new school year. (Yonhap)

Some pupils put under emergency child care services gathered in classrooms to take the online classes, but network connections there were unstable. Elementary schools run such services for dual-career families from 9 a.m. to 5 p.m.

At an elementary school in Suwon, just south of Seoul, a group of 16 second graders gathered at an emergency child care classroom, but they were not able to log into EBS’s online class program site.

Instead, they had to watch a YouTube video on the school’s history.

About 10 students from third to sixth grades attended online classes from the school’s computer room but failed to enter the EBS site as well.

The EBS site, also used by middle and high school students, had experienced similar access problems due to overloading on April 9, 13 and 14 for one to two hours each day.

Some cautiously expect that students may be able to return to their classrooms sooner than expected, as the daily number of new virus cases has recently dropped below 30.

But public health authorities have voiced caution over opening schools for the time being due to the possibility that group infections could spike, as was the case in Singapore.

The authorities had planned to administer the mock test offline depending on the coronavirus situation. As the government has again extended its social distancing campaign through May 5, the offline exam plan has been canceled.

The high school third graders will be asked to download the exam papers from the websites of EBS or regional educational offices, or pick them up from their schools before completing them at home and presenting the results to their schools.

As the exam results will not be reflected in official academic records, the mock CSAT test has been virtually nullified.