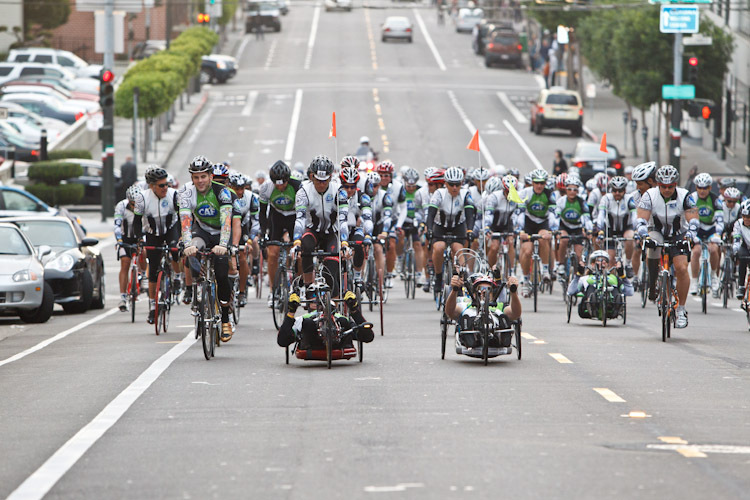 Each of the participants has pledged to raise $12,500 or more to benefit the Challenged Athletes Foundation, a nonprofit organization dedicated to helping athletes with physical challenges live full, active lives through sports and fitness. Collectively, they have already raised more than $1,376,000 – already exceeding the $1 million goal – which will allow the Challenged Athletes Foundation to fund grants for adaptive sports equipment, training and competition expenses, mentoring and sports clinics. Since its inception, the event has raised more than $8 million.

“The Mazda Foundation Million Dollar Challenge provides participants with a high-end event comparable to the experience pro cyclists receive,” said Virginia Tinley, executive director of the Challenged Athletes Foundation. “However, every year we are told it’s the opportunity to ride side-by-side with the challenged athletes that makes it a life-changing event.”

The event will kick-off at the Hyatt Regency Embarcadero Center in San Francisco on Saturday, Oct. 11 at 7 a.m. Cyclists will make their way down the coast, stopping in six beach cities before arriving at Kellogg Park in La Jolla, California on Friday, Oct. 17.

Participating in the challenge will be eight challenged athletes including Mary Roberts a below knee amputee, and Jamie Whitmore, a professional mountain biker before battling cancer and loosing nerves/feeling in her left leg, who is now a Paralympic cycling hopeful. Also riding are Challenged Athletes Foundation ambassador and NBA Hall of Famer Bill Walton, retired pro-cyclist and event co-chairman Christian Vande Velde, retired pro-cyclist David Zabriskie, as well as pro-cyclists from Team Garmin-Sharp.

To learn more about the Madza Foundation Million Dollar Challenge, please visit www.cyclemdc.com. For more information about Challenged Athletes Foundation, go to www.challengedathletes.org. To follow the MDC on Twitter, go to @CAFoundation or #MoreThanARide.

About the Challenged Athletes Foundation

The Challenged Athletes Foundation® (CAF) is a world leader in helping individuals with physical challenges get involved – and stay involved – in sports. CAF believes that participation in sports at any level increases self-esteem, encourages independence and enhances quality of life. Since 1994, more than $55 million has been raised and almost 9,500 funding requests from challenged athletes in all 50 states and dozens of countries have been satisfied. Additionally, CAF’s outreach efforts reach another 60,000 individuals each year. Whether it’s a $2,500 grant for a handcycle, helping underwrite a carbon fiber running foot not covered by insurance, or arranging enthusiastic encouragement from a mentor who has triumphed over a similar challenge, CAF’s mission is clear: give those with the desire to live active, athletic lifestyles every opportunity to compete in the sports they love. To learn more, log on to www.challengedathletes.org or call 858-866-0959.

Acting on a strong sense of responsibility to give something back to the communities in which it operates, Mazda established a philanthropic foundation. As the corporate foundation of Mazda North American Operations, it has awarded over $8 million to worthwhile causes across the United States since its initial grants in 1992. To learn more about the Mazda Foundation, please visit www.mazdafoundation.org.