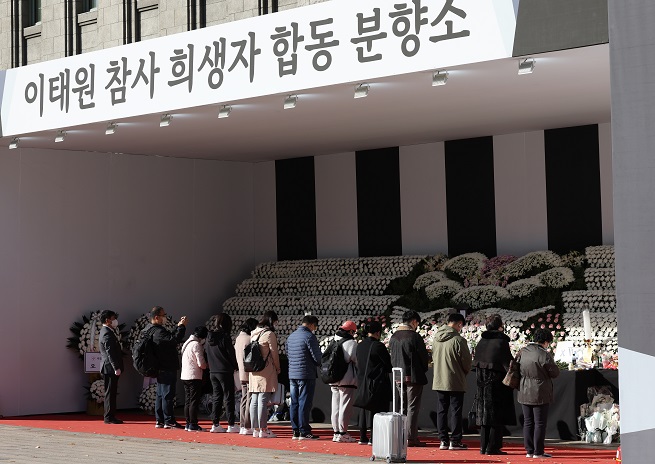 People pay respects to the victims killed in the Itaewon crowd crush at a memorial altar in front of City Hall in central Seoul on Nov. 5, 2022, the final day of the weeklong national mourning period for the disaster that killed at least 156 people. (Yonhap)

SEOUL, Nov. 6 (Korea Bizwire) — More than 117,000 people paid their respects at mourning altars set up across Seoul for the victims of the Halloween crowd crush that killed at least 156 people in the city’s nightlife district of Itaewon, city government officials said Sunday.

A total of 117,619 people visited the altars set up at Seoul Plaza in front of City Hall and 25 other locations run by the ward offices through Saturday, the last day of a weeklong national mourning period for the victims of the Oct. 29 tragedy.

President Yoon Suk-yeol paid his respects for six days in a row through Saturday, once at an altar set up near the Itaewon accident site and five other times at the Seoul Plaza altar.