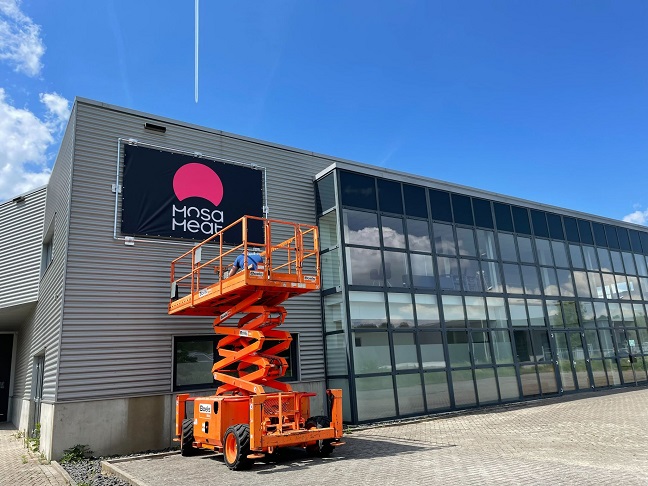 The Mosa Meat logo is added to the company’s most recent 2,760 m2 campus expansion.

Maastricht, The Netherlands, Oct. 18 (Korea Bizwire) – Mosa Meat, a leader in the cultivated meat space that grows beef directly from animal cells, and unveiled the first cultivated hamburger in 2013, has announced the next step in the scale up of the company’s cultivated beef production facilities.

A new industrial production development center is being developed close to Mosa Meat’s existing pilot facility in Maastricht. After demonstrating the beef cultivation process at pilot scale, Mosa Meat is now ready for the next phase of expansion, housing industrial-size production lines and enabling larger production quantities of beef.

“We’ve expanded our space by 30,000 square feet in our next phase, which brings Mosa Meat’s total footprint to over 77,000 square feet,” shared Maarten Bosch, Mosa Meat’s CEO. “This makes us the largest cultivated meat campus in the world, and provides a solid foundation for our European and global commercialisation plans.”

Global meat consumption is projected to grow more than 40% by 2030, and Mosa Meat is part of a growing global movement to transform the way meat is produced. Beef specifically, is the protein with the highest carbon footprint, which is why Mosa Meat has focused on it since the company was founded in 2016.

Mosa Meat has grown to over 160 employees, with over 80 scientists and the largest number of PhDs in the industry in just a few years’ time. The production team has grown five-fold in the last three months to 15 members. Simultaneously the company has also expanded its footprint at existing locations, including operations at Brightlands and the current pilot facility in Maastricht, where R&D capacity continues to grow. Together, this brings Mosa Meat one step closer towards commercialisation.

Mosa Meat plans to announce the launch of its industrial production development center in 2023.

Mosa Meat is a global food technology company pioneering a cleaner, kinder way of making real beef. Our founders introduced the world’s first cultivated beef hamburger in 2013, by growing it directly from cow cells. Founded in 2016, Mosa Meat is now scaling up production of the same beef that people love, but in a way that is better for people, animals, and the planet. A diverse and growing team of food-loving problem-solvers, we are united in our mission to fundamentally reshape the global food system. Headquartered in Maastricht, The Netherlands, Mosa Meat is a privately held company backed by Blue Horizon, M Ventures, Bell Food Group, Nutreco, Mitsubishi Corporation, Leonardo DiCaprio and other high-caliber investors.