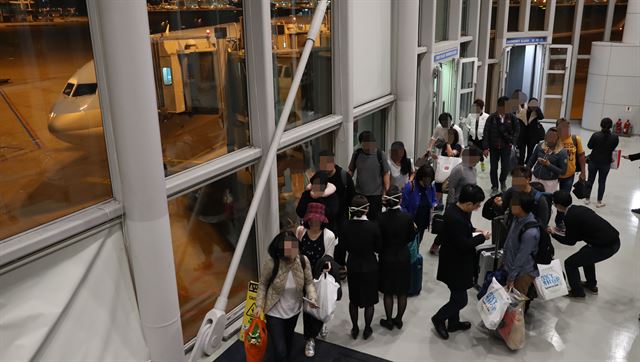 SEOUL, Dec. 1 (Korea Bizwire) — Most of the South Korean travelers stranded by a volcanic eruption in Bali, Indonesia, have been safely brought home, the foreign ministry said Friday.

A chartered Asiana Airlines passenger carrier, which the South Korean foreign ministry sent to Juanda International Airport near Indonesia’s Surabaya on Thursday, landed back at South Korea’s Incheon International Airport early Friday morning, bringing home 266 travelers stranded after the volcano closed down airports on and around the Indonesian resort island, according to the Ministry of Foreign Affairs.

The airport on Bali reportedly resumed operations on Thursday as volcanic ash from the eruption, which started last week, subsided.

A further 544 travelers were on their way back on Korean Air and Garuda Indonesia flights as of Friday morning, the ministry also said, meaning that almost of all South Korean travelers will have returned home from Bali.

“Nearly all our citizens stranded by the eruption of Mount Agung will have come home, as the four aforementioned flights have transported about 1,000 people,” it said. “The foreign ministry plans to closely watch the situation of Mount Agung’s eruption in order to provide the necessary support for our citizens.”