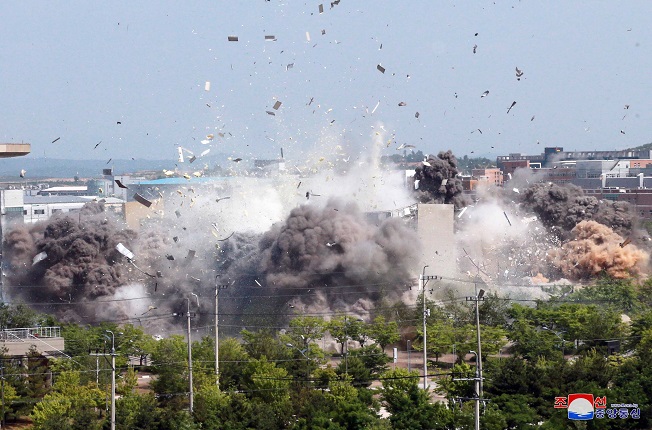 In a body blow to President Moon Jae-in’s yearslong drive for peace, the North blew up the office in its border city of Kaesong, which was established as a much-trumpeted symbol of cross-border reconciliation in September 2018.

The explosion came after the North took umbrage at anti-Pyongyang leaflets flown in across the border, threatened to turn work with the South into one “against the enemy” and warned of the Kaesong office collapse and of military action.

The fast-moving saga has unfolded against the backdrop of the North’s economic travails that have worsened due to biting global sanctions, pandemic-driven curbs on trade with China, tourism and business activity, as well as fears of food shortages caused by a lack of outside fertilizer aid.

“For North Korean leader Kim Jong-un, everything seems to be going awry, from his efforts for a turnaround in nuclear talks with the U.S. to his economic drive and to his push to put the pandemic under control,” Nam Chang-hee, professor of diplomacy at Inha University, said.

“To put it simply, it is a failure for the North Korean leader, and he might want to shift the blame to the South or deflect criticism. For the North, the South may be an easy target while it may feel cautious to direct its grievances to the U.S.,” he added.

The destruction of the liaison office was foreordained, as Kim Yo-jong, younger sister of the leader, warned Saturday night, “Before long, a tragic scene of the useless North-South joint liaison office completely collapsed would be seen.”

The demolition marked a culmination of the North’s near-daily threats to punish the South for anti-Pyongyang leaflets floated by North Korean defectors across the border into the communist country.

Indeed, experts said that the leaflets, aimed at shining a light on the brutality of the North Korean dictatorship, its human rights abuses and the merits of capitalism in the South, posed a challenge to the leadership in Pyongyang.

But the North appears to have seized on the leaflet issue to accuse the South of failing to broker a nuclear deal with the U.S. and make an indirect appeal for U.S. flexibility, observers said.

What’s notable is that at the center of Pyongyang’s campaign against Seoul has been Kim Yo-jong, serving as the first vice director of the powerful Organization and Guidance Department of the ruling Workers’ Party.

Speculation still abounds that the leader’s sister could be next in line for the hereditary throne should Kim become incapacitated.

But observers said that Kim appears to put his sister at the vanguard of inter-Korean and foreign policy affairs vulnerable to public opprobrium.

The demolition of the Kaesong office dimmed the prospects for inter-Korean reconciliation efforts that have been stalled amid a deadlock in nuclear negotiations between Washington and Pyongyang. 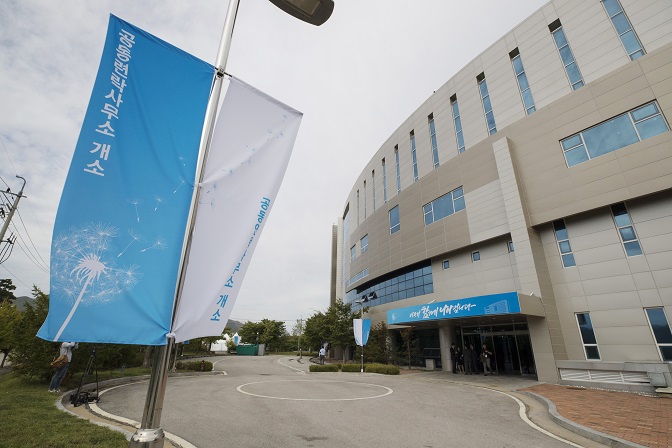 But analysts said that the ominous development could have a silver lining, as Kim still appears intent on maintaining engagement with U.S. President Donald Trump, whose unorthodox brand of foreign policy had created new diplomatic opportunities, as evidenced in the first U.S.-North Korea summit in Singapore in 2018 and the unprecedented meeting at the inter-Korean border last year.

“Though the North’s recent tough rhetoric against the South has appeared to also target the U.S., Pyongyang did not apply any direct pressure to the U.S. as it would think the pressure tactic against Washington for now may not be effective,” Park Won-gon, professor of international politics at Handong Global University, said.

Apparently mindful of a possible pushback from Trump, who is already saddled with a raft of domestic issues, such as the COVID-19 pandemic, its economic fallout and the upcoming reelection battle, the North has largely been reticent on ties with the U.S.

But Pyongyang’s hardening rhetoric is deepening concerns that the demolition of the Kaesong building could mean the South Korean president’s persistent push for denuclearization and lasting peace on the peninsula hangs in the balance.

What’s worse, Pyongyang has threatened to scrap an inter-Korean military pact aimed at reducing border tensions, raising the possibility that it could carry out larger military provocations that could bring Moon’s peace initiative to naught.

“When the North calls the work with the South the work against the enemy, and has destroyed the liaison office in a way that damaged the South’s property rights, Moon may find it difficult to embrace the North,” Park said.

“The time appears to have come for a recalibration of Seoul’s approach,” he added.

Despite the downward trajectory of inter-Korean ties, Trump is likely to take a wait-and-see approach as long as the North does not cross the red line by breaching its self-imposed moratorium on nuclear and long-range missile launches, observers said.

Analysts largely concur that Pyongyang may refrain from provoking Trump for the time being as the U.S. leader is cornered over anti-racism rallies and could return to his past “fire and fury” rhetoric.