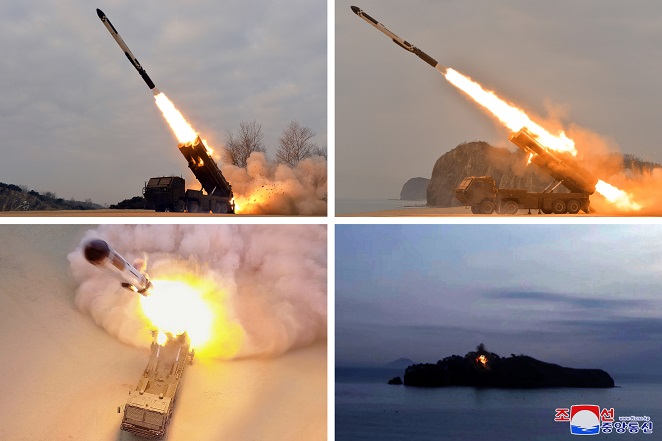 The Joint Chiefs of Staff (JCS) said it detected the missile, fired at a steep angle from Mupyong-ri in the northern province of Jagang, at 7:52 a.m., and it flew about 800 kilometers at a top altitude of 2,000 km.

The missile hit a top speed of Mach 16, 16 times the speed of sound, and appears to be similar to the Hwasong-12 missile that the North tested in 2017, a military official told reporters, requesting anonymity.

Sunday’s launch marks the North’s seventh show of force this year and by far its biggest weapons test since the test-firing of its self-proclaimed intercontinental ballistic missile (ICBM) in November 2017.

Fears of the recalcitrant engaging in more provocative actions have lingered as Pyongyang issued a thinly veiled threat on Jan. 20 to lift its moratorium on strategic weapons tests declared in April 2018.

“Our military is tracking and monitoring related North Korean movements and maintaining a readiness posture,” the JCS said in a text message sent to reporters.

The military authorities here are conducting a detailed analysis on Sunday’s launch, including whether it used a solid-fuel or liquid-fuel rocket.

Some analysts said the latest launch could be part of a long-running effort to ultimately deploy a credible longer-range ballistic missile capable of striking the U.S. territory of Guam and its mainland.

Particularly, the North’s quest to develop ICBMs has been a major source of concern here as the missiles could strike the continental U.S., keep American forces at bay and thus call into doubt the U.S. security commitment to South Korea. 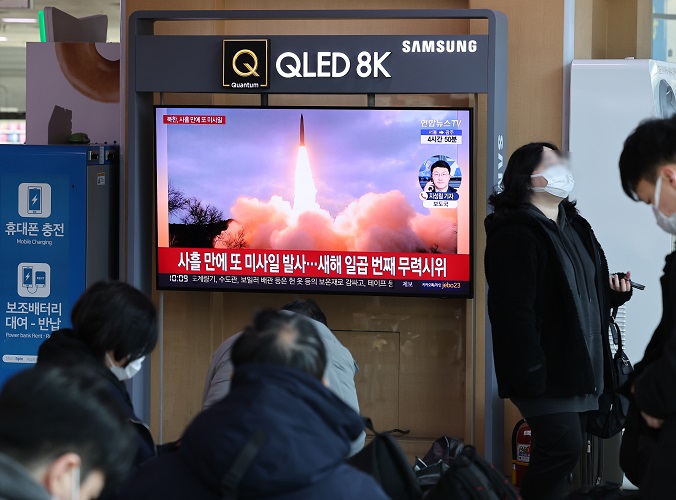 A news report on North Korea’s launch of an intermediate-range ballistic missile is aired on a television at Seoul Station on Jan. 30, 2022. South Korea’s military said the missile flew about 800 kilometers at a top altitude of 2,000 km. (Yonhap)

President Moon Jae-in presided over a plenary session of the National Security Council (NSC) for the first time in about a year and called the latest launch a violation of U.N. Security Council (UNSC) sanctions. But he stopped short of calling it a “provocation.”

The U.S. Indo-Pacific Command condemned the launch and called on the North to refrain from “further destabilizing acts.”

“While we have assessed that this event does not pose an immediate threat to U.S. personnel, territory or that of our allies, we will continue to monitor the situation,” the command said.

“The U.S. commitment to the defense of the ROK and Japan remains ironclad,” it added, referring to South Korea by its official name, Republic of Korea.

Pyongyang has been ratcheting up tensions with a series of missile launches since the start of this year as Washington has stepped up sanctions pressure amid a protracted deadlock in nuclear talks between the two countries.

The North launched the largest monthly number of projectiles in January since North Korean leader Kim Jong-un took power in late 2011. It conducted six projectile launches in both March and July 2014.

The North fired what it claims to be surface-to-surface tactical guided missiles Thursday, just two days after its apparent long-range cruise missile test.

It conducted four other launches earlier this month, including those of what it claimed to be hypersonic missiles.

The recent bouts of the North’s saber-rattling also came as it seeks to tighten internal unity amid the fight against the COVID-19 pandemic and persistent economic woes stemming from debilitating sanctions.