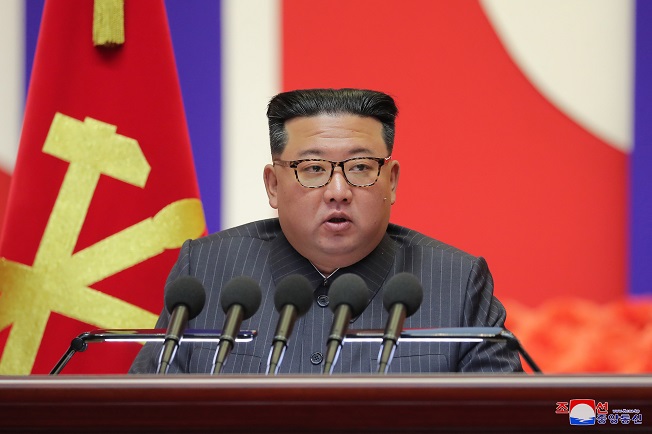 This photo, released by the North’s official Korean Central News Agency on Aug. 11, 2022, shows North Korean leader Kim Jong-un making a speech to declare victory in the country’s fight against COVID-19 during a national meeting on anti-epidemic measures in Pyongyang held the previous day. (Yonhap)

According to the official Korean Central News Agency (KCNA), a face mask mandate and other antivirus restrictions were lifted across the country, except “frontline areas and borderline cities and counties.”

But mask-wearing is recommended in case of respiratory disease symptoms, such as the flu, according to the KCNA.

Pyongyang announced its first COVID-19 case May 12 after claiming to be coronavirus-free for over two years and implemented nationwide lockdowns.

The North’s daily fever tally has remained at zero since July 29 after peaking at over 392,920 on May 15

The North’s latest declaration comes just before South Korea and the United States kick off the Ulchi Freedom Shield (UFS) exercise on Aug. 22 amid concerns that Pyongyang could dial up regional tensions with military provocations.