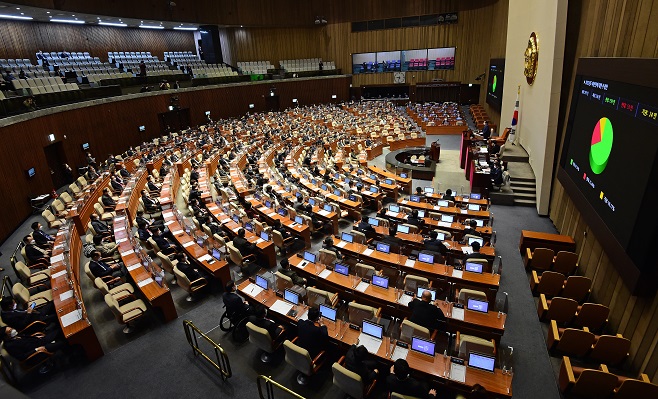 The National Assembly holds a plenary session to handle the government’s 2022 budget bill at the assembly compound in Seoul on Dec. 3, 2021. (Pool photo) (Yonhap)

SEOUL, Dec. 4 (Korea Bizwire) — The National Assembly passed the 2022 government budget Friday, a record high amount of 607.7 trillion won (US$516.3 billion) to cope with the economic fallout of the COVID-19 pandemic and other expenses.

The bill’s passage came a day after the legal deadline, as last-minute negotiations between the ruling Democratic Party (DP) and main opposition People Power Party (PPP) caused a delay in the finance ministry’s computation work.

The final package is an increase of 3.3 trillion won from the government proposal, the second consecutive year the budget has been expanded by the assembly.

The PPP refused to endorse the budget after objecting to the defense ministry’s request for 7.2 billion won to build a light aircraft carrier. The full amount was restored after initially being slashed by the parliamentary defense committee.

Next year’s budget includes 68 trillion won worth of support measures for small businesses hit by the pandemic.

The DP raised the minimum compensation for business losses from the current 100,000 won to 500,000 won, although the PPP had called for an increase to 1 million won.

Businesses that do not qualify for the compensation, such as the tourism, sports and culture sectors, will be offered separate support measures worth 400 billion won.

The total value of local currency coupons to be issued next year was raised from the government’s plan of 6 trillion won to 30 trillion won.

The government will also offer 36 trillion won in loans to 2.13 million small business owners at ultra-low annual interest rates of around 1 percent.

In other expenditures, the budget for antivirus health care was increased by around 1.4 trillion won to more than 7 trillion won.

The money will be spent on purchasing oral COVID-19 medication for 404,000 people, securing 14,000 more hospital beds for critically ill COVID-19 patients, and supporting people with adverse reactions to coronavirus vaccines.

Also included in the budget are additional funds for child care services, funds to establish a response system to supply chain risks, such as the recent shortage of urea solution, and an increase in local subsidies following an increase in tax revenues.

Finance Minister Hong Nam-ki said in a Facebook message the government increased the budget meant to restore people’s livelihoods, including strengthened responses to COVID-19 and support for vulnerable people amid growing uncertainties over the pandemic.

He said the government will scale down sale of state bonds to improve fiscal soundness for future generations.

According to the 2022 budget, the country’s national debt stands at 1,064.4 trillion won. It is the first time the debt has surpassed the 1,000 trillion won mark.

The ratio of national debt to its gross domestic product (GDP) also hit an all-time high of 50 percent, up 2.7 percentage points from this year’s budget.