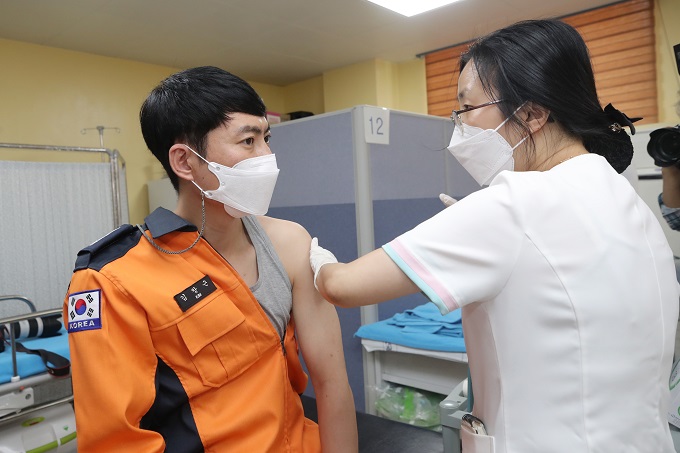 A firefighter receives a COVID-19 vaccine shot at a hospital in the southwestern city of Gwangju, 329 kilometers south of Seoul, on April 26, 2021. (Yonhap)

SEOUL, May 31 (Korea Bizwire) — Nearly seven out of 10 South Koreans are willing to take vaccine shots to combat the coronavirus, a poll showed Monday.

According to the survey conducted from April 25-27 jointly by the Central Disaster and Safety Countermeasures Headquarters and the Ministry of Culture, Sports and Tourism, 69.2 percent of 912 unvaccinated respondents said they would like to get vaccinated, up by 7.8 percentage points from a month ago.

About 16 percent answered they would not take vaccine shots, while 14.71 percent said they were not sure whether to take them or not.

The respondents were allowed to choose multiple answers.

Around 44 percent said they would not take vaccine shots because they could not get the type of vaccine they wanted.

Overall, the respondents positively responded to the government’s vaccine programs and other measures to combat the COVID-19 pandemic.

But they said there was room for improvement in stopping virus variants from entering and spreading in the country.

Also, the respondents said the government should put priority on getting more people to get vaccinated (48.2 percent), followed by securing as many vaccine doses as possible (42 percent).

More than half of the respondents said they were getting sufficient information on social distancing guidelines while not receiving enough information on vaccine safety and efficacy.