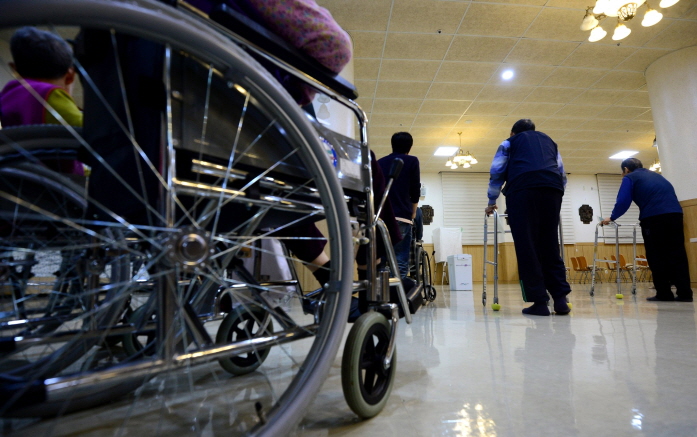 Of seniors with disabilities, 49.7 percent suffered from physical handicaps linked to old age and other illnesses. (Yonhap)

SEOUL, Apr. 17 (Korea Bizwire) — Nearly half of all South Koreans who are registered as having disabilities are over 65, with numbers steadily rising in recent years, a government report showed Wednesday.

The annual disabilities report compiled by the Ministry of Health and Welfare showed that as of last year, 2.59 million people, or 5 percent of the 51.83 million people living in the country, suffered from some kind of debilitating condition.

Of seniors with disabilities, 49.7 percent suffered from physical handicaps linked to old age and other illnesses, followed by 20.9 percent suffering from hearing loss, while 11.6 percent struggled with sight and brain-related illnesses.

“The rise in number is not out of the ordinary as seniors tend to be more frail and suffer from more problems,” a ministry official said.

Broken down by gender, 57.9 percent, or some 1.5 million disabled, were men compared with 42.1 percent for women. This disparity is the result of men being generally more physically active and assigned to more dangerous jobs.

The data showed that 1.23 million or 47.9 percent of all disabled people in the country were physically handicapped, with people suffering from hearing and sight-related impairments standing at 13.2 percent and 9.8 percent, respectively.

Those categorized with serious disabilities made up 38 percent of the total, with the rest being mild cases, the findings showed.