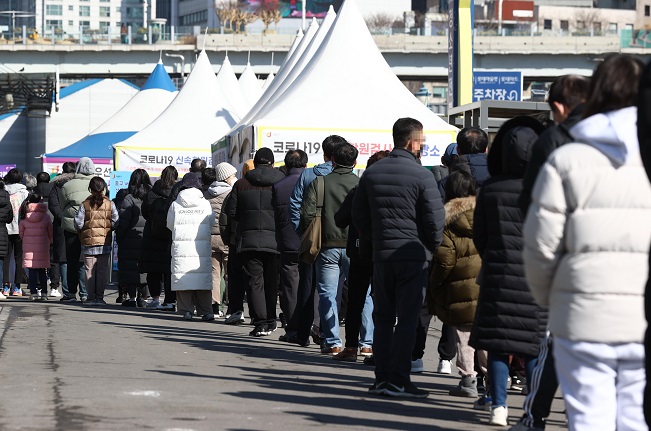 SEOUL, Feb. 27 (Korea Bizwire) — South Korea’s daily COVID-19 cases stayed below 170,000 for the third straight day Sunday, but critical cases from the virus continued to rise at a fast pace amid the spread of the highly contagious omicron variant.

The country reported 163,566 new coronavirus infections, including 163,414 local cases, raising the total caseload to 2,994,841, according to the Korea Disease Control and Prevention Agency (KDCA).

The tally slightly decreased from the 166,207 reported Saturday. Daily infections exceeded the 100,000 mark for the first time a week earlier and hit a record high of 171,451 on Wednesday.

The surge in virus cases raised the number of critically ill COVID-19 patients to 662, up from the previous day’s 643.

In accordance, the bed occupancy rate in hospitals’ intensive care units for COVID-19 patients stood at 44.9 percent as of 5 p.m. Saturday, up 0.9 percentage point from the same time a day earlier.

The country added 49 more COVID-19 deaths. The accumulated death toll came to 7,944, and the fatality rate was 0.27 percent, according to the KDCA.

The government said the current wave is expected to peak at some 250,000 daily cases in mid-March as the highly contagious omicron variant is raging across the nation.

The number of patients receiving at-home treatment hit another high of 768,773, up 65,079 from the previous day.

Daily cases are tallied until midnight and announced the following morning. 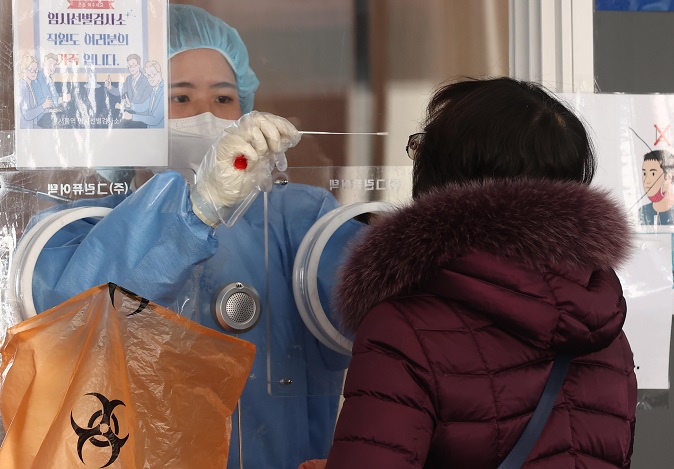 A medical worker collects a swab sample for a coronavirus test at a makeshift COVID-19 testing facility in Seoul on Feb. 27, 2022. (Yonhap)

Health authorities said they will focus on dealing with serious cases and preventing deaths in a bid to better deal with the omicron wave under the current medical system as the strain has milder severity than other variants.

Instead of rigorous contact tracing, the government opted for enhanced at-home treatment and more use of rapid antigen self-test kits.

The country also partially relaxed its virus curbs by extending the business hour curfews for cafes and restaurants by one hour to 10 p.m. But it maintained the six-people cap on private gatherings. The measures will be effective until March 13.

Of the locally transmitted cases reported, Seoul reported 35,286 new cases. The surrounding Gyeonggi Province and the western city of Incheon added 46,799 and 11,129 new infections, respectively. Cases from overseas went up 152.

As of Sunday, 31.4 million people, or 61.1 percent of the country’s 52 million population, had received booster shots. The number of fully vaccinated people came to 44.4 million, accounting for 86.4 percent, according to the KDCA.

On Monday, 1.22 million doses of vaccines by Moderna Inc. will be delivered from a local plant of Samsung Biologics Co.

The vaccines are part of a contract with the major South Korean contract drug manufacturer to provide contract manufacturing organization services for the U.S. biotech company’s mRNA vaccine at its plant in Songdo, Incheon, 40 kilometers west of Seoul.

The planned shipments will raise the total amount of COVID-19 vaccines delivered here to 9.11 million.