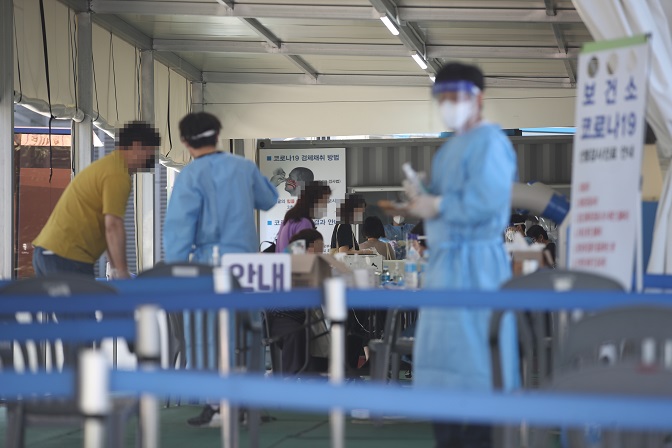 The number of fully vaccinated people surpassed the 20 million mark, representing 39 percent of the population, with a nationwide effort to boost vaccination rates.

The country added 1,755 COVID-19 cases, including 1,725 local infections, raising the total caseload to 272,982, according to the Korea Disease Control and Prevention Agency (KDCA).

The latest caseload was down from over 1,800 cases over the past two days. However, it was the second-largest figure for weekend days.

Daily cases have stayed in the quadruple digits for more than two months amid the fast spread of the more transmissible delta variant nationwide.

The country added one more death from COVID-19, raising the death toll to 2,359.

As of 6 p.m. Sunday, South Korea reported 1,234 new cases, down 22 from the same time the previous day, according to health authorities and local governments.

Daily cases are counted until midnight and announced the following morning. The greater Seoul area accounted for 81.7 percent of the total.

Infections in the capital area have been giving the authorities a headache, with more than 70 percent of the new domestic cases being reported in Seoul, Gyeonggi Province and Incheon.

The KDCA data showed the daily average number of local infections in the past week was 1,763, and 1,268 were from the greater Seoul area.

Health authorities are particularly worried about a potential uptick in virus cases after the Chuseok holiday, the Korean autumn harvest celebration, next week when tens of millions of people are expected to travel across the country.

To curb infections, the authorities decided to extend the current social distancing measures — Level 4 in the greater Seoul area, which is the highest in the four-tier system, and Level 3 in other regions — for another four weeks through Oct. 3.

While limiting the size of private gatherings and restaurant business hours, some restrictions have been eased to give leeway to vaccinated people. 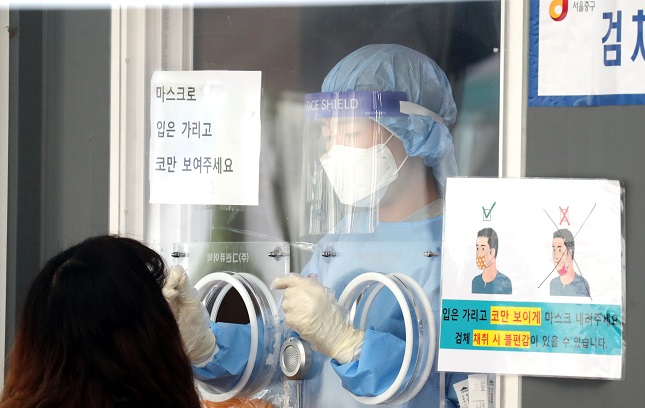 A health worker clad in a protective suit collects a sample from a citizen at a makeshift COVID-19 testing clinic in Seoul on Sept. 12, 2021. (Yonhap)

People in their 70s had the highest vaccination rate in the country with 88.9 percent, followed by those aged 60-69 with 86.4 percent and senior citizens aged 80 or older with 79.2 percent.

The country aims to provide at least one jab to 70 percent of the population by the end of September with hopes of reaching herd immunity in November.

Of the newly confirmed domestic cases, 656 were from Seoul, 481 from the surrounding Gyeonggi Province and 146 from the western port city of Incheon.

Among virus clusters, a traditional market in southern Seoul added 24 cases, raising its total to 110.

The number of cases linked to a vehicle parts factory in Asan, South Chungcheong Province, rose by nine to 54, while 13 more cases were found to be tied to a cram school in Daejeon, raising its total to 42.

Imported cases, which include South Korean nationals, came to 30, down 19 from the previous day. The total number of imported cases is now at 13,495.

Of the latest cases from overseas, six were from Uzbekistan, followed by Russia with five.

The number of patients with serious symptoms across the country reached 351, down one from the previous day.

The total number of people released from quarantine after making full recoveries was 244,459, up 1,499 from a day earlier.