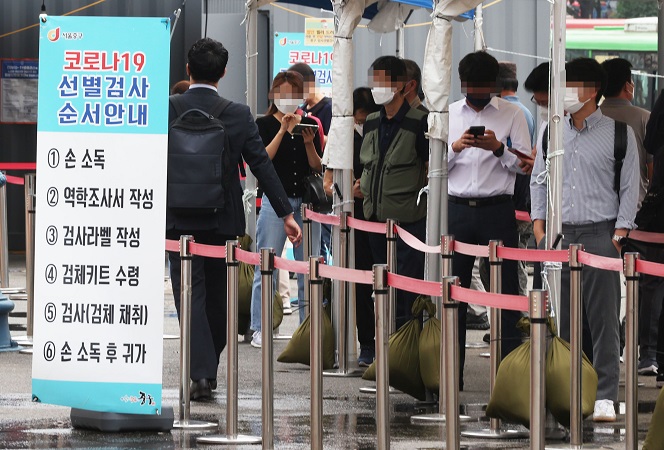 People stand in line to take coronavirus tests at a screening clinic in front of Seoul Station on Sept. 10, 2021. (Yonhap)

The country added 1,865 more COVID-19 cases, including 1,816 local infections, raising the total caseload to 271,227, according to the Korea Disease Control and Prevention Agency (KDCA).

The daily caseload has stayed in the four-digits since July 7 amid the fast spread of the more transmissible delta variant nationwide.

As of 9 p.m. Saturday, South Korea reported 1,636 new cases, down 78 from the same time the previous day, according to health authorities and local governments.

Daily cases are counted until midnight and announced the following morning. The greater Seoul area accounted for 74.1 percent of the total. 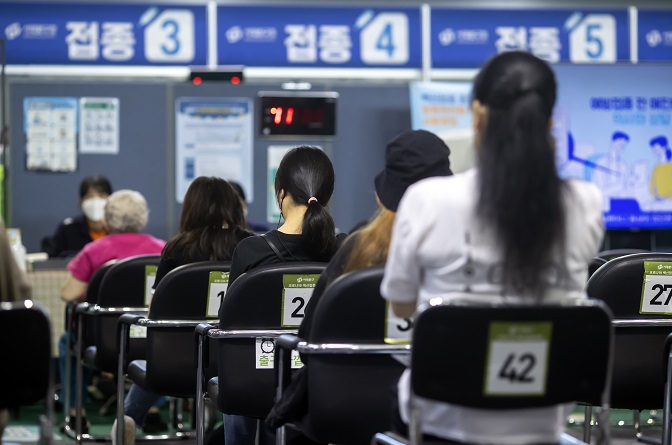 People wait after receiving their COVID-19 vaccine shots at a vaccination center set up at a culture and sports facility in western Seoul on Sept. 9, 2021. (Yonhap)

The capital area has seen a resurgence of infections, with 74.2 percent of the new domestic cases being counted in Seoul, Gyeonggi Province and Incheon.

Health authorities have expressed particular concern about the potential spread of the virus during the Sept. 20-22 Chuseok fall harvest holiday, when millions of South Koreans typically travel nationwide for family gatherings.

Virus curbs have been extended for another four weeks through Oct. 3, with the greater Seoul area under Level 4, the highest in the four-tier system, and other regions under Level 3.

More than 32.8 million people, or 63.9 percent of the country’s population of 51.3 million, have received at least one shot of a COVID-19 vaccine, health authorities said.

The number of fully vaccinated people rose to over 19.8 million, or 38.6 percent of the population.

The government has said its aim is to give at least one shot to 70 percent of the population before the Chuseok holiday and reach herd immunity by October.

The total number of people released from quarantine after making full recoveries was 242,960, up 2,227 from a day earlier.