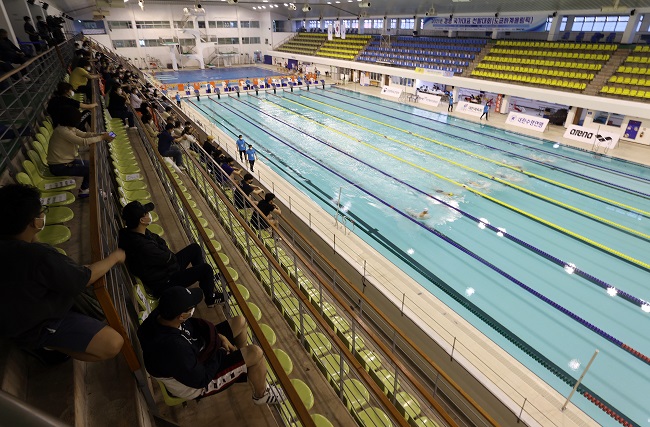 This photo taken on May 16, 2021, shows a small number of spectators watching a preliminary swimming match held at Jeju Stadium on Jeju Island to select members of the national team ahead of the Tokyo Olympics this year amid the COVID-19 pandemic. (Yonhap)

SEOUL, May 16 (Korea Bizwire) — South Korea’s daily new coronavirus cases stayed in the 600s for the second consecutive day on Sunday as the country focuses on its vaccination campaign amid tight vaccine supply.

Daily infections fell from 681 on Saturday after posting more than 700 cases on Thursday and Friday as sporadic cluster infections continued nationwide.

There were four additional virus deaths, raising the total to 1,900. The fatality rate was 1.44 percent.

As of 9 p.m. Sunday, South Korea had 562 new cases, the same total as the 9 p.m. figure from Saturday. Case numbers are typically lower on weekends because there are fewer tests.

Last week, the country had 463 cases on Monday, but had 747 on Friday before seeing it fall into the 600 range over the weekend.

South Korea started its vaccination program on Feb. 26, but its inoculation drive has been making little progress amid the tight supply of vaccines.

The country earlier announced its bold plan to vaccinate 13 million people by June and achieve herd immunity by November. South Korea is currently making efforts to keep the daily figure below 1,000 through end-June while speeding up inoculations of seniors.

Health authorities said around 8.95 million people between age 60 and 74 will receive vaccination shots in the coming weeks.

Starting May 27, people between age 65 and 74 will be administered with AstraZeneca’s vaccine. Those between age 60 and 65 will also receive the same vaccine starting June 7.

As of Sunday, 935,357 people, or 1.8 percent of the country’s population, have been fully vaccinated, receiving both doses of two-part vaccines.

AstraZeneca’s vaccine has been given to 2.05 million people, while 1.69 million have received that of Pfizer. 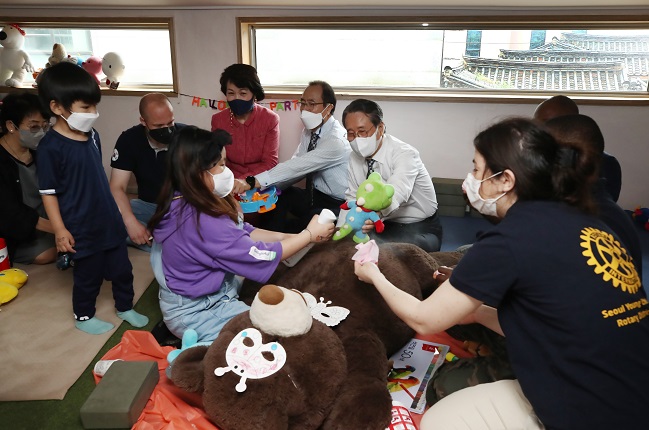 This photo taken on May 16, 2021, shows Rotary International District 3650 Governor Yoo Jang-hee (3rd from R) and other participants disinfecting toys at a community center in Jongno, central Seoul, after delivering “COVID-19 hygiene gift sets” to 26 facilities for single mothers and 100 underprivileged households in Seoul. (Yonhap)

Authorities remain on alert amid concerns over the spread of the virus among people going out to enjoy warmer weather.

Currently, the greater Seoul area, home to more than half of the country’s 52 million people, is under Level 2 social distancing, the third highest in the five-tier scheme.

Gatherings of five or more people are banned nationwide in principle.

Of the locally transmitted cases, 208 cases came from Seoul, and Incheon and its surrounding Gyeonggi Province accounted for 171 cases.

Cases tied to a church in northern Seoul reached 15, with cases involving a nursing home for the elderly in Seongnam, Gyeonggi Province, reaching 10 and cases related to an entertainment facility in the southeastern port city of Ulsan at 12.

Imported cases came to 38. Among them, 20 were South Koreans and 18 were foreigners. Cases from Asian countries except for China stood at 29, seven from the United States and two from Europe, the KDCA said.

The number of patients in serious or critical condition came to 150, unchanged from the previous day.

The total number of people released from quarantine after making full recoveries was 121,764, up 482 from a day earlier.