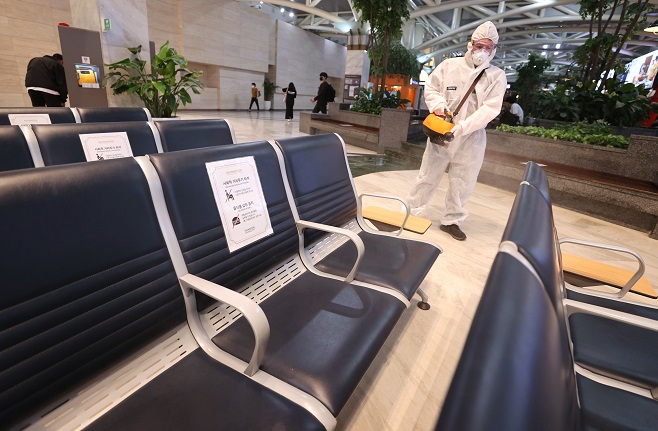 A health worker in a protective suit disinfects seats at an express bus terminal in Seoul on Sept. 17, 2021. (Yonhap)

The country added 2,008 COVID-19 cases, including 1,973 local infections, raising the total caseload to 281,938 according to the Korea Disease Control and Prevention Agency (KDCA).

The daily caseload remained in the 2,000s on Tuesday and Wednesday before falling to 1,943 on Thursday.

Daily infections have stayed above the 1,000 threshold for more than 70 days amid the fast spread of the more transmissible delta variant nationwide.

The country added three more deaths from COVID-19, raising the death toll to 2,389. The fatality rate was 0.85 percent.

Later in the day, health authorities said 1,911 new cases were confirmed from 12 a.m. to 9 p.m. Friday, 13 more than at the same time the previous day.

The daily total is counted until midnight and announced the following day.

Infections in the greater Seoul area, home to half of the country’s population, have been a major concern for local health authorities, with nearly 80 percent of domestic cases being reported in Seoul, Gyeonggi Province and Incheon.

The authorities remained worried the virus spread could further expand in other regions after the Chuseok holiday, the Korean autumn harvest celebration, when tens of millions of people are expected to travel across the country.

The authorities urged people to stay at home and get vaccinated to curb the spread. They will also enforce special quarantine measures, including running COVID-19 testing clinics at highway rest stops, for two weeks through Sept. 26.

While limiting the size of private gatherings and restaurant business hours, they have eased some restrictions to give leeway to vaccinated people. 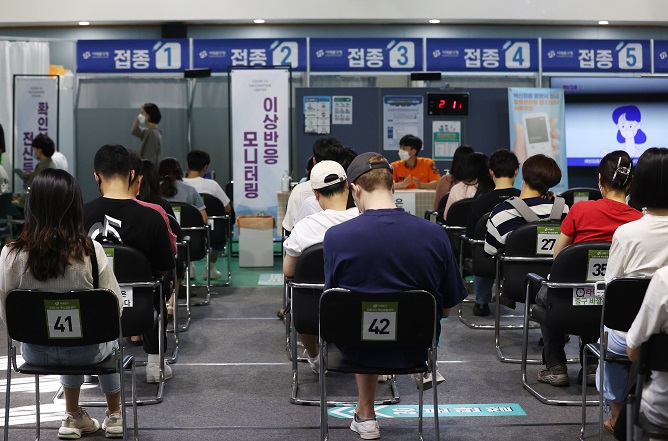 This photo taken on Sept. 16, 2021, shows people at a makeshift vaccination center in western Seoul after receiving COVID-19 shots. (Yonhap)

A total of 35.41 million people, or 69 percent of the country’s population, have received their first shots of COVID-19 vaccines since the inoculation program started in February, and 21.48 million people, or 41.8 percent, have been fully vaccinated, the KDCA said.

The authorities said the country has achieved a first-shot vaccination rate of 70 percent, the country’s initial inoculation goal, as of Friday.

South Korea also aims to see 70 percent of the population getting fully vaccinated by end-October and plans to give more incentives for vaccinated people.

Of the newly confirmed domestic cases, 738 cases came from Seoul, 655 from Gyeonggi Province, which surrounds the capital city, and 139 cases from the western port city of Incheon.

Among virus clusters, a cram school in Daejeon added four cases, raising its total to 63.

The number of cases linked to a vehicle parts factory in Asan, South Chungcheong Province, rose by seven to 70, while two more cases were found to be tied to a restaurant in Daegu, raising its total to 78.

Imported cases, which include South Korean nationals, came to 35, up 13 from a day earlier. The total number of imported cases is now at 14,084.

Of the newly added imported cases, seven were from Uzbekistan, followed by the United States with four.

From October, people coming from 20 countries, including Brazil, Indonesia and Chile, will be subject to a two-week mandatory isolation here even if they are vaccinated, according to the KDCA. Currently, 36 countries are subject to such a restriction.

The number of patients with serious symptoms across the country reached 332, down 16 from the previous day.

The total number of people released from quarantine after making full recoveries was 254,094, up 2,056 from a day earlier.

The authorities said they will expand options of treating the virus at home for asymptomatic patients and those with mild symptoms. Since last year, some 3,500 people have received treatment at home.