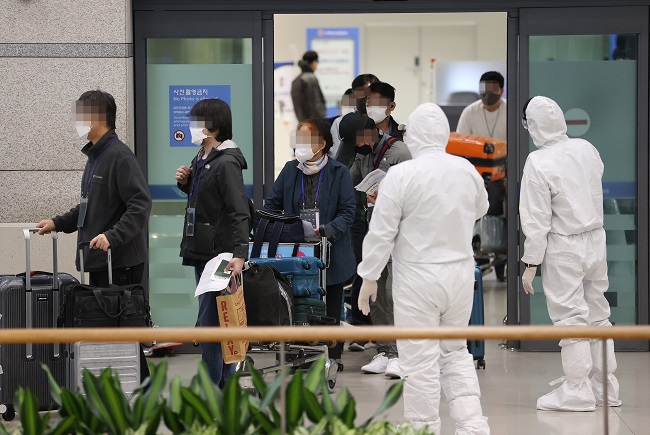 South Koreans from COVID-19-hit India arrive at Incheon International Airport on May 7, 2021. (Yonhap)

SEOUL, May 7 (Korea Bizwire) — South Korea’s daily new virus cases remained in the 500s for the second day Friday as the country remained guarded against a potential upsurge in variant cases.

The daily caseload reached 488 on Monday on fewer tests over the weekend but rose to the mid-500s on Tuesday and to over 600 on Wednesday.

Acting Prime Minister Hong Nam-ki said health authorities will make all-out efforts to pull down the daily new cases below 500 per day on average. The reproduction rate is under 1 this week, indicating that a virus patient infects less than one person.

In an enhanced measure against rising mutated cases in the southeastern city of Ulsan, the health authorities increased the number of temporary screening centers to 10 from three in the city and advised citizens to take virus tests.

More than 300 cases reported in the city since early March are believed to be the mutant virus from Britain.

As of Tuesday, variant cases from Britain, South Africa and Brazil reached 632.

Hong also said the government will make efforts to curb the spread of the mutated virus from India.

The second group of more than 200 South Koreans returned home Friday from virus-hit India via a special flight and more people are scheduled to arrive here this month. The first group of over 170 South Koreans came back here Tuesday.

Hong said the government has been operating a task force to support the development of COVID-19 vaccines by local companies. 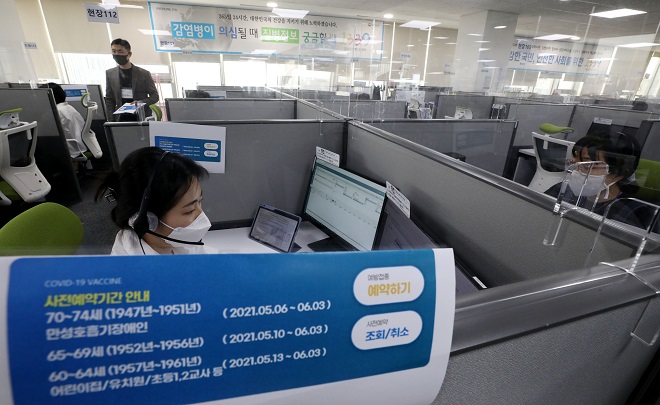 A worker at a call center in Seoul on May 6, 2021, accepts reservations from people aged 70-74 who want to be inoculated with AstraZeneca’s vaccine. (Yonhap)

With an aim of achieving herd immunity by November, the authorities are accelerating the vaccination campaign.

A total of 3,608,616 people, including 41,965 the previous day, have received at least their first shots of COVID-19 vaccines, accounting for 7 percent of the country’s population, since the country started its vaccination program on Feb. 26.

AstraZeneca’s vaccine has been given to 1.96 million people, while 1.65 million have received that of Pfizer.

A total of 18,871 cases of side effects after vaccinations have been reported, up 611 from a day earlier.

A total of 92 post-vaccination deaths have been reported, although the exact causes of the deaths remain unknown as they could not determine causality, the health authorities said.

In a briefing, 11.5 percent or 246,000 of people aged 70-74 made reservations for their vaccinations, which started Thursday, the authorities said.

Those who are aged between 65 and 69 can make reservations for their vaccinations Monday, with the 60-64 age group able to book their inoculations starting next Thursday.

Health authorities said people aged 60 and over are advised to get the vaccine jabs, saying 86.6 percent of people in the age group who were vaccinated were found to be safe from infection.

There were 16 new imported cases, up four from a day earlier, the KDCA said. The number of patients with serious symptoms across the country reached 162, down 10 compared with the previous day.

The total number of people released from quarantine after making full recoveries was 116,022, up 531 from a day earlier.

As of 9 p.m. Friday, health authorities and local governments had reported 643 new COVID-19 cases, up 162 from the same time Thursday.