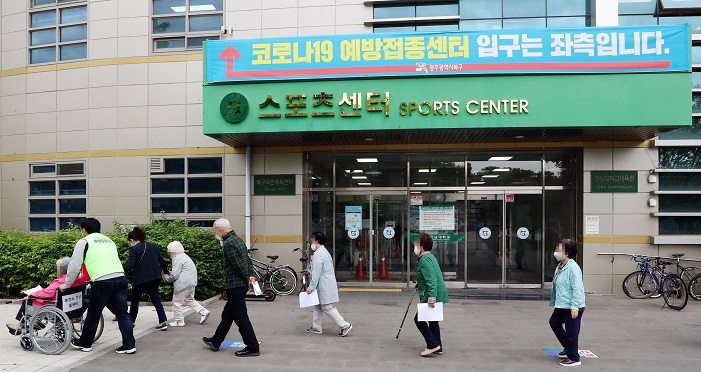 This photo taken May 10, 2021, shows elderly people walking into a coronavirus vaccination facility in Gwangju, 330 kilometers southwest of Seoul. (Yonhap)

SEOUL, May 10 (Korea Bizwire) — South Korea’s daily new coronavirus cases rose by the smallest number in a week on Monday due to fewer tests over the weekend, but health authorities remained worried over a potential spike amid spreading variant cases.

Monday’s figure fell from 564 Sunday and 701 Saturday as fewer people took virus tests over the weekend. The daily caseload usually spikes after weekends as more people get tested.

The average daily infections neared 600 in the past week as people have increased their gatherings and activities to enjoy the warmer weather.

There was one additional death from the virus, raising the total to 1,875. The fatality rate was 1.47 percent.

Later in the day, health authorities and local governments reported 446 new virus cases as of 9 p.m., up 34 cases from the same time on Sunday.

Spreading variant cases are putting health authorities on edge as the country’s southeastern region and cities are reporting a spike in mutated cases.

Meanwhile, the country is revving up its vaccination drive with an aim to inoculate 13 million people by June and 36 million by September.

The country aims to create herd immunity by November.

A total of 3,674,729 people have received their first shots of COVID-19 vaccines, accounting for 7.2 percent of the country’s population, since the country started its vaccination program on Feb. 26.

AstraZeneca’s vaccine has been given to 2 million people, while 1.66 million have received that of Pfizer. 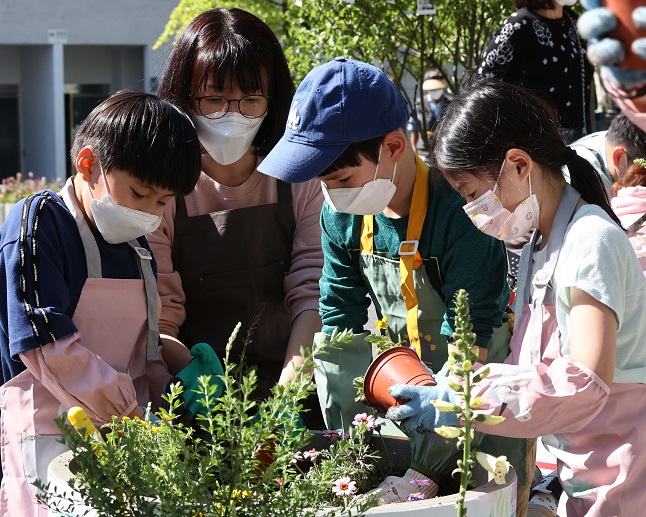 In this photo taken May 9, 2021, a family participates in an offline gardening event held in Manri-dong, central Seoul, amid the COVID-19 pandemic as part of the Seoul International Garden Show scheduled from May 14-20. (Yonhap)

A total of 19,705 cases of side effects after vaccinations have been reported, up 74 from a day earlier, although 96.4 percent of them were mild symptoms.

A total of 95 post-vaccination deaths have been reported, although the exact causes of the deaths remain unknown as health authorities could not determine causality, the KDCA said.

Health authorities said some 8.95 million people between age 60 and 74 will receive vaccination shots in the coming weeks.

In its latest efforts to encourage people to get vaccinated, the government said Monday it will provide medical costs of up to 10 million won (US$9,000) per person starting May 17 if a vaccine taker suffers from post-vaccination side effects or not overtly vaccination-related ones.

If their post-vaccination side effects are proven, compensation will be provided with prepaid medical expenses excluded.

“It is our top priority to maintain or reduce the current trend, and it is very important for the seniors to get vaccinated as their fatality rate is high,” Son Young-rae, a senior official at the health ministry, said in a briefing.

Of the newly locally transmitted cases, 283 cases came from the capital area, with 136 from Seoul, 135 from Gyeonggi Province and 12 from Incheon, just west of Seoul.

The number of seriously or critically ill COVID-19 patients was 161, up one from the previous day.

The total number of people released from quarantine after making full recoveries was 117,844, up 421 from a day earlier, with 8,053 people being isolated for COVID-19 treatment.