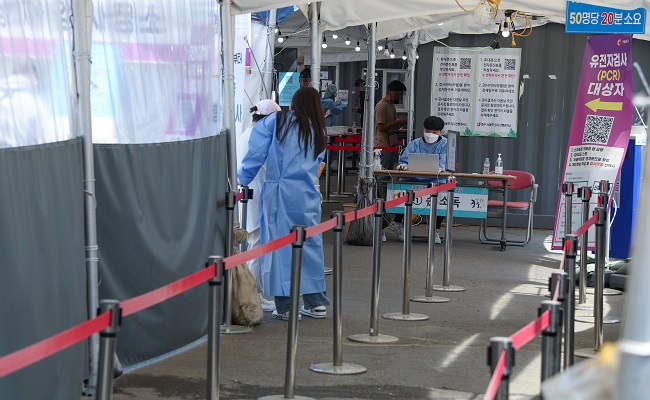 This photo taken May 16, 2022, shows a deserted COVID-19 testing station near Seoul Station in central Seoul amid a slowing virus trend. (Yonhap)

The country reported 35,117 new COVID-19 infections, including 26 from overseas, bringing the total caseload to 17,830,429, the Korea Disease Control and Prevention Agency (KDCA) said.

The latest figure is a big jump from the previous day’s 13,296, but daily numbers tend to fall over the weekend through Mondays due mainly to fewer tests, before bouncing back on Tuesdays.

The decline demonstrates the slowing virus trend in South Korea, a country that had been gripped by the rapid spread of the omicron variant earlier this year. The daily cases had surged to over 620,000 at one point in March.

The number of critically ill patients came to 333, down from the previous day’s 345.

As of 9 p.m. on Tuesday, the country had reported 30,631 new infections, down 3,317 from the same time a day earlier, according to local governments and health authorities. Daly cases are counted until midnight and announced the following morning.

The government plans to decide later this week whether to further relax COVID-19-related restrictions, as the four-week interim period set to prepare for a post-pandemic scheme is due to end Friday.

At focus is whether health authorities will lift the seven-day mandatory quarantine requirement for confirmed patients, as its removal is bound to reshape the virus response system in the prolonged battle against the pandemic.

The KDCA said an additional 13 cases of the omicron subvariant, BA.2.12.1, known to be spreading fast in the United States, has been found in South Korea, including two domestic cases detected for the first time. That raises the total to 19 so far.

The public health agency also said it has found one case of the subvariant BA.4 and two cases of another subvariant, BA.5. These subvariants have increasingly been found in South Africa.

While the subvariant BA.2.12.1 is about 20 percent more transmissible than the “stealth omicron,” it poses little risks in terms of severity, the KDCA said.

As of midnight Monday, 44.56 million, or 86.8 percent of the population, had completed the full two-dose vaccinations, and 33.23 million, representing 64.8 percent, had received their first booster shots.

A total of 3.52 million people had gotten their second booster shots, the KDCA said.