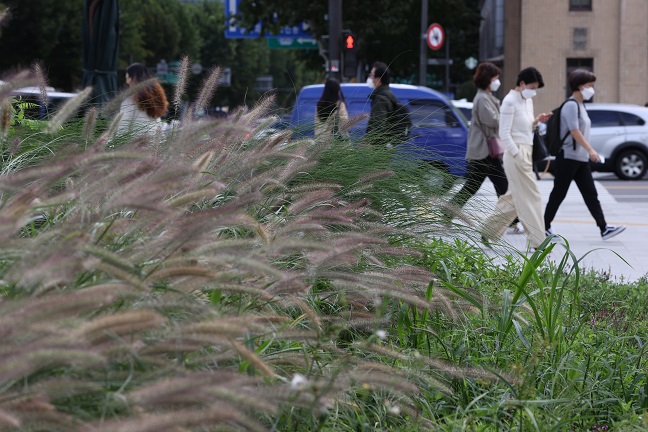 This photo, taken on Oct. 12, 2021, shows poeple walking on a road near the Gwanghwamun Square in central Seoul. (Yonhap)

SEOUL, Oct. 16 (Korea Bizwire) — South Korea’s daily new COVID-19 cases stayed in the 1,600s for the second consecutive day Saturday, as the government plans to relax social distancing rules, starting next week, ahead of a gradual return to normal life.

The country added 1,618 more COVID-19 cases, including 1,594 local infections, raising the total caseload to 340,978, according to the Korea Disease Control and Prevention Agency (KDCA).

The latest tally was down from 1,684 cases reported on Friday and 1,940 on Thursday. The daily infection count has stayed in the quadruple digits since July 7 and in the 1,000s for eight consecutive days.

On Friday, the government announced a set of eased social distancing rules as South Korea prepares for a “living with COVID-19″ scheme next month, in which the virus will be treated as an infectious respiratory disease, like seasonal influenza.

Under the renewed plan that will take effect Monday, the greater Seoul area — home to half of the country’s population of 52 million — will remain under the toughest social distancing of Level 4, while the rest of the country will be under Level 3.

Still, the government will allow social gatherings of up to eight people, up from the current cap of six, in the greater Seoul area after 6 p.m. if four of them are fully vaccinated. The relaxed curb will be applied to all multiuse facilities, including cafes and restaurants.

As of 9 p.m. Saturday, South Korea had reported 1,370 new cases, down 118 from the same time Friday. This likely ensures that cases will stay below 2,000 for the ninth straight day.

Daily cases are counted until midnight and announced the following morning. The numbers tend to drop on weekends because of fewer tests and then bounce back up during the week. 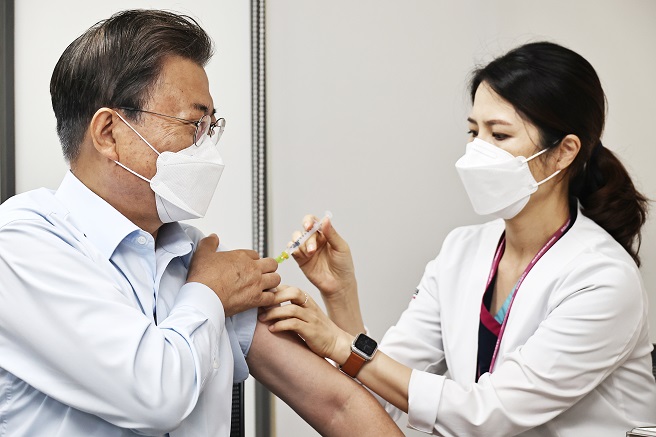 The KDCA said 40.33 million people, or 78.5 percent of the country’s population, have received their first shots of COVID-19 vaccines and the number of fully vaccinated people stands at 32.81 million, or 63.9 percent.

So far, 320,910 cases of suspected post-vaccination side effects have been reported, with 8,637 counted in the past two days. More than 96 percent of the cases involved mild symptoms, such as muscle pain and fever.

There have been 781 deaths after vaccination, though the authorities have yet to identify a causal relationship between inoculation and death in most cases.

Cluster infections continued to crop up across the country. The number of virus cases traced to a workplace in central Seoul swelled to 40, while the number of infections tied to a nursing home in Incheon, west of Seoul, rose to 18.

The military reported one additional COVID-19 case, bringing its total caseload to 1,961, the defense ministry said.

The number of new imported cases came to 24. The cases include 17 from Asian countries, excluding China, and one from Europe.

The number of patients with serious symptoms across the country reached 361, down 10 from the previous day, the KDCA said.

The total number of people released from quarantine after making full recoveries came to 308,187, up 2,336 from a day earlier.