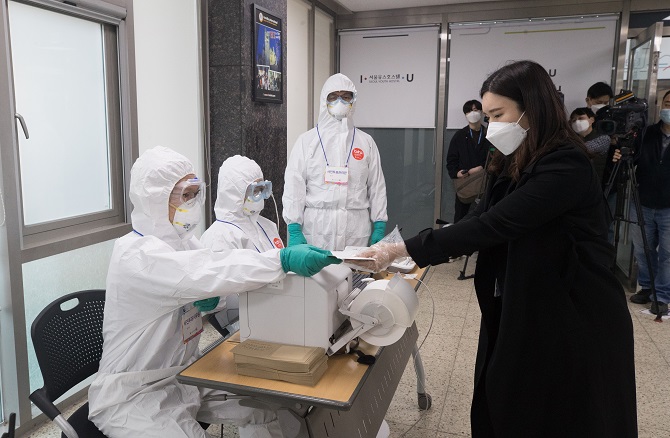 This photo taken on March 23, 2021, shows Seoul Metropolitan Government officials providing a sample ballot to a woman in a straw vote held at Seoul Youth Hostel in central Seoul ahead of the city’s mayoral election on April 7. (Yonhap)

SEOUL, March 23 (Korea Bizwire) — South Korea’s daily new coronavirus cases fell back to below 400 on Tuesday for the first time in a week amid concerns of a potential resurgence as the AstraZeneca vaccine rollout for elderly citizens began after a one-month delay over safety concerns.

The country reported 346 more COVID-19 cases, including 331 local infections, raising the total caseload to 99,421, according to the Korea Disease Control and Prevention Agency (KDCA).

The country added seven more deaths from COVID-19, increasing the total to 1,704. The fatality rate was 1.71 percent, the KDCA said.

The daily caseload had stayed above 400 for the past six days without showing signs of letting up in the densely populated greater Seoul area.

As of 9 p.m., health authorities and local governments reported 387 more COVID-19 cases across the country, 80 more than at the same time on Monday. Daily new cases are counted until midnight and then announced the following morning.

To curb the pandemic in the greater Seoul area, which is home to roughly half of the country’s 52 million population, the KDCA extended virus curbs, the third highest in the five-tier virus restriction that were set to expire on March 14 for another two weeks until March 28.

The KDCA said they will decide Friday whether to once again extend the current virus curbs by another two weeks but given the current situation, the measures are highly likely to be extended.

The greater Seoul area has been under the current Level 2 social distancing measures since February. The measures include attendance caps at schools, religious activities and sports events.

Health authorities plan to step up the AstraZeneca COVID-19 vaccine rollout as health authorities confirmed that there is no evidence suggesting a correlation between the vaccines and blood clots found in some recipients.

The use of the vaccine for elderly citizens has been suspended for weeks as safety concerns arose after reports of blood clots in people who received AstraZeneca products in Europe, forcing more than a dozen European countries, including Germany, France and Italy, to suspend the vaccine shots.

On Monday, the Korea Advisory Committee on Immunization Practices, an independent panel of experts, said the AstraZeneca vaccine has nothing to do with the blood clots found in some vaccine takers and the vaccine rollout will continue.

On Tuesday, South Korea began administering the AstraZeneca vaccine to inpatients of nursing homes and long-term care hospitals who are aged 65 and older.

Under the country’s vaccination program that started Feb. 26, a total of 12 million people will be vaccinated by the end of June. Foreigners also will be inoculated under the program. 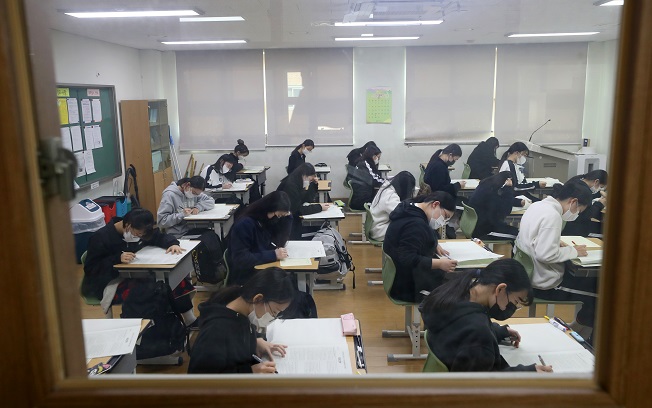 A class of students takes this year’s first nationwide examination at a high school in Chuncheon, Gangwon Province, on March 23, 2021. (Yonhap)

A total of 680,560 people have been given COVID-19 vaccine shots as of Monday. This accounts for around 1.3 percent of the country’s population and 84.8 percent of those who are advised to be vaccinated by the end of March.

On Saturday, the country began administering the second Pfizer shots.

Pfizer vaccines for some 250,000 people are set to arrive here on Wednesday for the inoculation of people aged 75 or older. The vaccines are part of Pfizer vaccines for 13 million people which will be provided under a deal with the U.S. pharmaceutical firm.

Pfizer vaccines for 3.5 million people are scheduled to arrive by the end of June.

The second round of shots for AstraZeneca’s vaccine is expected to begin in late April.

A total of 9,804 cases of side effects after vaccinations have been reported, but most of them have turned out to be mild symptoms, such as headaches, fever and nausea.

Sixteen deaths after vaccinations have been reported, the health agency said.

In other efforts to contain the virus, health authorities extended the ban on passenger flights arriving from Britain, which has been in place since Dec. 23, until April 1 to block the new virus variant that was first identified there.

All foreign arrivals have been required to present certificates of negative polymerase chain reaction (PCR) tests taken within 72 hours of their departure for South Korea since late February.

They are also required to undergo a 14-day isolation period upon their entry into the country.

Of the new locally transmitted cases, 97 came from Seoul and 120 were reported from Gyeonggi Province that surrounds the capital. Incheon, 40 kilometers west of Seoul, reported 12 more cases.

Cases related to a gathering of foreigners in Seongnam, just southeast of Seoul, rose by two to reach 25.

The number of imported cases came to 15, down from 19 the previous day. Cases from the United States and Europe stood at five, with cases from Asian countries, except for China, and Africa at three and two, respectively.

The number of seriously or critically ill COVID-19 patients was 101, down two from the previous day.

The total number of people released from quarantine after making full recoveries was 91,079, up 468 from a day earlier.