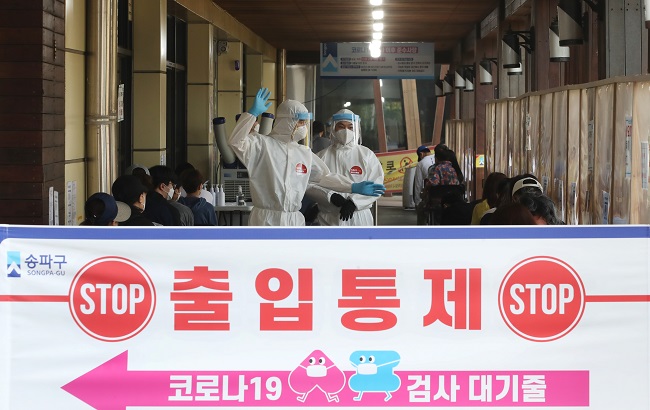 People wait for COVID-19 tests at a screening station in southern Seoul on June 2, 2021. (Yonhap)

SEOUL, June 2 (Korea Bizwire) — South Korea’s daily new coronavirus cases bounced back to over 600 for the first time in six days Wednesday due to continued cluster infections, while health authorities are ramping up efforts to speed up the nationwide vaccination campaign to slow down the spread of the virus.

The daily caseload stayed in the 400s for the past three days partly due to fewer tests over the weekend, but it shot up as sporadic cluster infections continued in schools, workplaces, bars and hospitals.

There were two additional deaths, raising the total to 1,965.

Later Wednesday, health authorities and local governments reported 653 new cases as of 9 p.m., up 32 from the same time the previous day.

As the vaccine rollout among the elderly population gains pace, the health authorities on Tuesday eased social distancing guidelines for vaccinated people.

While up to eight immediate family members are currently allowed to gather, those who have received at least one shot of COVID-19 vaccines are exempted from the distancing rule.

The KDCA said it plans to raise its guard against the new coronavirus at beaches as more people are expected to travel locally during the summer season.

Starting July, the country will operate a three-level alert system — green, yellow and red — to warn visitors of congestion at beaches. It will also monitor visitors’ temperatures via a special sticker and provide a wristband after checking their temperatures.

The education ministry said it will prepare for full-fledged in-person schooling starting in the second half to help close the pandemic-caused learning gap among students.

A total of 6.35 million people, including 565,377 the previous day, have received their first shots of COVID-19 vaccines since the vaccine rollout on Feb. 26, taking up 12.4 percent of the total population.

Vaccine doses by AstraZeneca and Pfizer were administered to 4 million and 2.34 million people, respectively.

The KDCA said 2.2 million people, or 4.3 percent of the total population, have been fully vaccinated, with 25,945 receiving their second jabs the previous day. 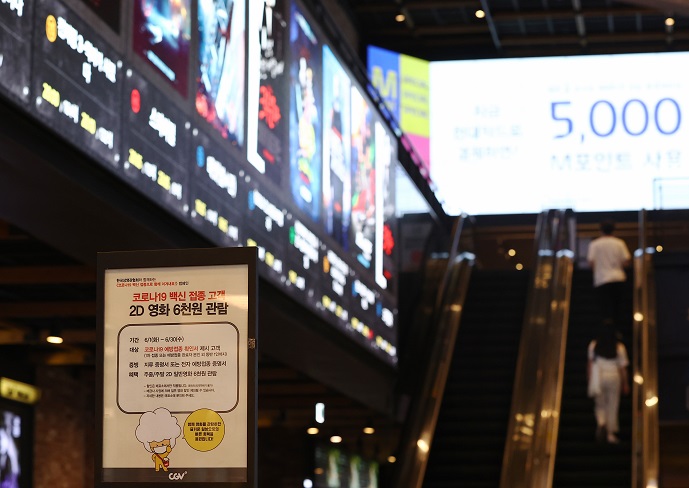 A movie theater in Seoul offers ticket discounts for those who have received at least one COVID-19 vaccine shot on June 2, 2021. (Yonhap)

A total of 29,850 cases of side effects after vaccinations have been reported, although 94.9 percent of them were mild symptoms.

So far, 192 post-vaccination deaths have been confirmed, with 10 additional fatalities being reported the previous day, but the exact causes of the deaths remain unknown as causality could not be determined, the KDCA said.

Health authorities expected over a quarter of the nation’s population to get jabs by this month with increased supply of vaccine doses, as part of a plan to achieve herd immunity by November.

An additional 650,000 doses of the Pfizer vaccine arrived earlier in the day, following shipment of the first batch of Moderna vaccines, enough for 27,500 people, on Tuesday, becoming the third vaccine available in the nation.

The Janssen vaccines will be given to reservists, members of civil defense and those related to the country’s defense and foreign affairs, and those aged under 30 will be excluded amid concerns over blood clots.

Reservations for 900,000 doses of Janssen’s vaccine were fully booked in about 18 hours after an online booking system opened Tuesday, the KDCA said, representing strong interest for the one-shot regimen among those in their 30s and 40s.

Of the locally transmitted cases, 256 came from Seoul and 188 from the surrounding Gyeonggi Province.

A high school in northern Seoul has reported 34 cases among seniors, and tests are under way for all students.

There were 23 additional imported cases, 13 from Asian nations excepting China.

The number of seriously or critically ill COVID-19 patients came to 151, down seven from the previous day.

The total number of people released from quarantine after making full recoveries was 132,068, up 605 from a day earlier.